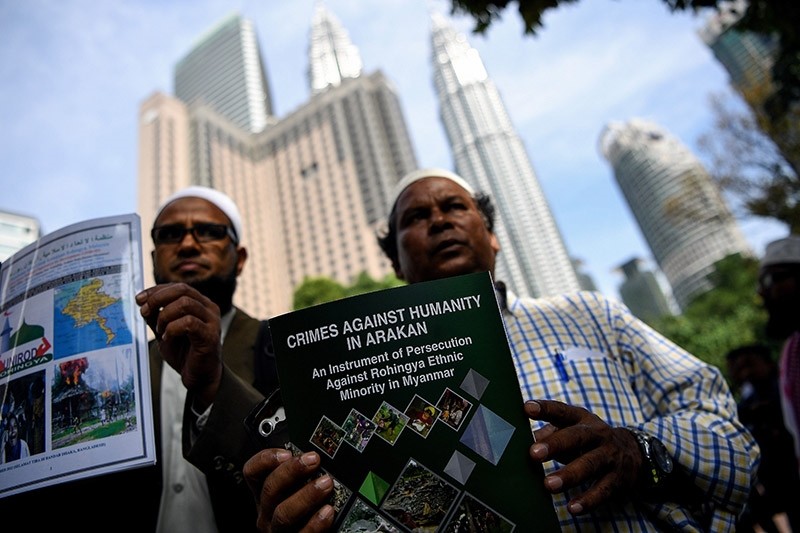 Rohingya refugees living in Malaysia gather outside the venue of the Extraordinary Session of OIC on the Rohingya situation in Myanmar, in Kuala Lumpur on January 19, 2017. (AFP Photo)
by Anadolu Agency Feb 02, 2017 12:00 am

A pilot scheme to give work to Rohingya refugees in Malaysia is to be launched next month, Deputy Prime Minister Ahmad Zahid Hamidi said Thursday.

Malaysia will initially allow 300 Rohingya whose refugee status is validated by the United Nations High Commissioner for Refugees (UNHCR) to take jobs in the agriculture and manufacturing sectors from March 1, the minister said in a statement.

The Rohingya, a Muslium minority from Myanmar, will be the first batch of refugees to be allowed to take legal employment in the country.

"They would be placed in selected companies under the agriculture and manufacturing sectors, aimed at providing them with skills and financial support to enable them to build their lives before being relocated to third world nations," Hamidi said.

Those selected still have to pass a security and health screening.

Undocumented refugees, including Rohingya, are still not allowed to work. According to the UNHCR, Malaysia hosts around 151,000 refugees and asylum seekers, 55,000 of whom are Rohingya.