Philippines slams China, realigns with US in surprise move 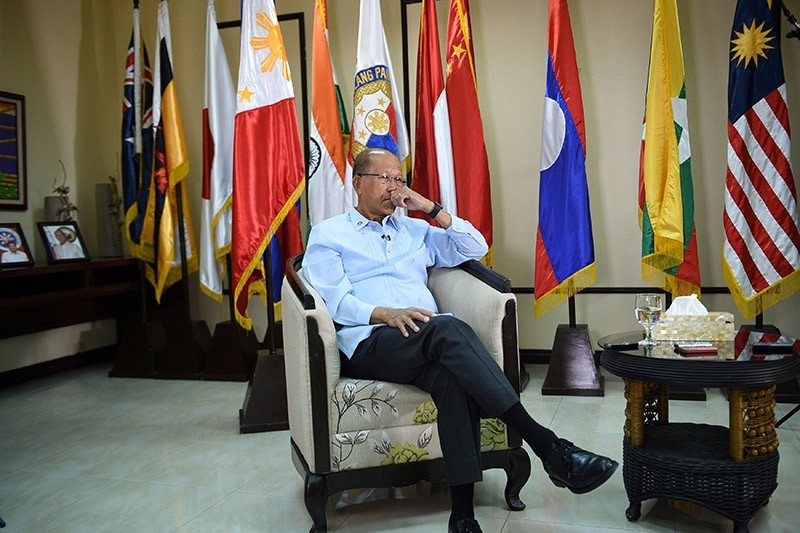 Philippine Defense Secretary Delfin Lorenzana takes part in an interview at the defence offices in Manila on Feb. 7, 2017. (AFP Photo)
by Daily Sabah with Wires Feb 07, 2017 12:00 am

Filippino President Rodrigo Duterte has given the green light to the U.S. military to build barracks and fuel depots in designated local camps where American forces are allowed to temporarily station under a 2014 defense pact, Defense Secretary Delfin Lorenzana said Tuesday.

The move is considered surprising as Duterte threatened last month to abrogate the agreement if the U.S. stores weapons in local camps, saying his country may get entangled if fighting erupts between China and the U.S. He identified three areas where U.S. forces were supposedly bringing in their armaments, including the western Philippine province of Palawan, which faces the disputed South China Sea. He had said if the U.S. builds an arms depot "I will consider a review and maybe ultimately abrogate" the pact all together.

Defense Secretary Lorenza said he also told Duterte that construction in the camps has not started and was scheduled later this year or next year.

"I actually asked his decision if we will continue with the EDCA construction or not," Lorenzana added. "Duterte said OK, let's proceed, but make sure that there is no stockpiling of ammunition there."

On the other hand, Lorenzana also slammed China as he claimed that the country tried to build on a reef off the Philippines' coast, a move that he considered to be unacceptable.

Lorenzana said he believed China would eventually reclaim the Scarborough Shoal, which sits just 230 kilometers (143 miles) from the main Philippine island of Luzon, situated on a strategically important waterway.

China has already built a number of islets and reefs in the South China Sea, installing military facilities on several of them. Analysts say that similar installations on Scarborough Shoal could give China effective military control over the disputed waterway - something the US has said it is not prepared to accept.

"They occupied three islands there plus they are trying to get Scarborough. So to us that is unacceptable. If we allow them, they will build. That's very, very disturbing. Very much (more) disturbing than Fiery Cross because this is so close to us," Lorenzana added.

Duterte took office in June and has moved to rekindle once-frosty relations with China while repeatedly threatening to scale back military exercises with American troops and stop agreements that allow U.S. forces to visit.

Analysts pointed out the possibility that the Philippines could distance itself from the U.S. and set up closer relations with China and its allies.