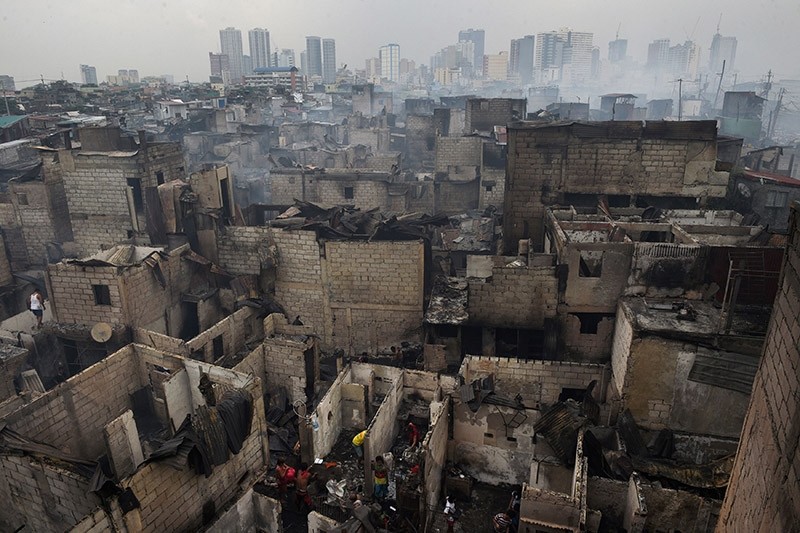 Smoke billows from houses gutted by a fire overnight in an informal settlers area, near the south harbour port, in Manila on February 8, 2017. (AFP Photo)
by Compiled from Wire Services Feb 08, 2017 12:00 am
More than 15,000 people were left homeless and seven were injured by an overnight fire that struck a slum area in the Philippine capital Manila, fire officials said Wednesday.

The fire started Tuesday evening in a shanty house in the slum district of Tondo, Senior Superintendent Wilfredo Tiu, a regional chief of the Bureau of Fire Protection said.

The fire destroyed 1,200 shanty houses before it was put out Wednesday morning after raging for 10 hours.

Seven residents were injured as they tried to save their personal belongings before fleeing the fire, he added.

Three evacuation centers were opened, and food and water are being provided to the 3,000 families who lost their homes, said welfare officer Regina Jane Mata.

But hours after the blaze was put out, many of the people were still huddled on a nearby road with their belongings, including clothes and even washing machines and electric fans.

The fire snarled traffic, blocking delivery trucks going to and from the port.

Investigators were still determining what caused the blaze , but past incidents have been blamed on faulty electrical wiring since many of the houses in the slum area have illegal connections.