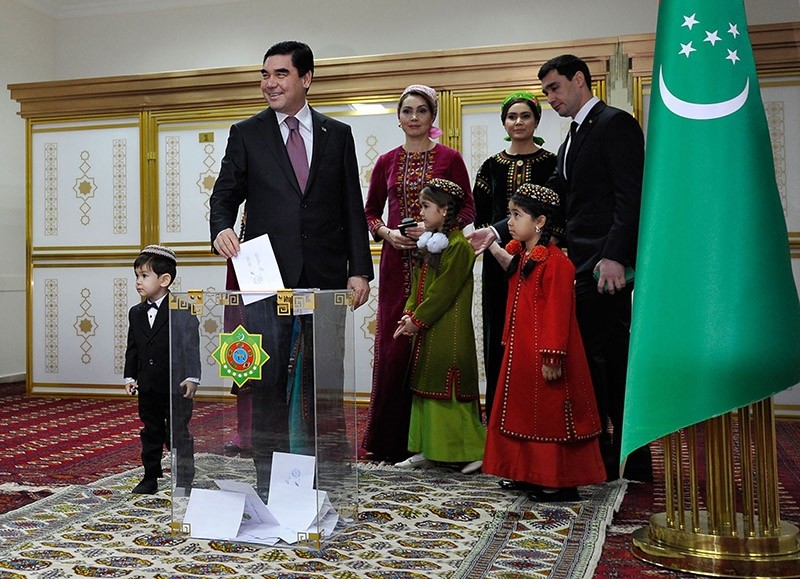 Turkmenistan's President Gurbanguly Berdymukhamedov casts his vote at a polling station during the presidential election in Ashgabad, on February 12, 2017 (AFP Photo)
by Feb 13, 2017 12:00 am

The election commission claimed at a press conference in the capital Ashgabat a massive turnout for the Sunday poll in which eight other candidates, viewed as token opponents for Berdymukhamedov, also competed.

The former dentist and health minister took power in 2006 after the death of Turkmenistan's first president, Saparmurat Niyazov.

Casting his vote at a school in Ashgabat on Sunday, the president said the vote would decide "the fate of the people for the coming seven years".

"If I am elected then our policies aimed at improving the welfare of the people will continue," Berdymukhamedov said.

Last year Berdymukhamedov signed off on constitutional changes that paved the way for his lifelong rule by removing upper age limits for presidential candidates.

Another change lengthened presidential terms from five to seven years.

Voters in Ashgabat overwhelmingly said they were backing Berdymukhamedov Sunday.

"I voted for the first time, and chose our president," said Zokhra, an 18-year old student who was voting at her university.

"We are deciding our future," said Zokhra, adding that she was handed one of Berdymukhamedov's books and a bunch of flowers by officials after she cast her vote.

But a number of people in and around the capital told AFP they did not intend to vote, casting some doubt on the official turnout figure.

Sabir Rakhmanov, an Ashgabat taxi driver, said he could not participate because he is registered to vote in another region.

"I don't think my vote would affect anything anyway," he told AFP. "The main thing is to have regular work. That's something I would vote for!"

One-sided votes are typical in Central Asia, a Muslim-majority ex-Soviet region politically close to Russia and China, where reigning presidents are usually expected to die in power.

Although Turkmenistan sits on the world's fourth largest natural gas reserves, it has failed to diversify export routes and its hydrocarbon-based economy as a whole.

In recent years the country of over five million people has traded its traditional economic reliance on Russia for dependence on China, which buys the vast majority of its gas.