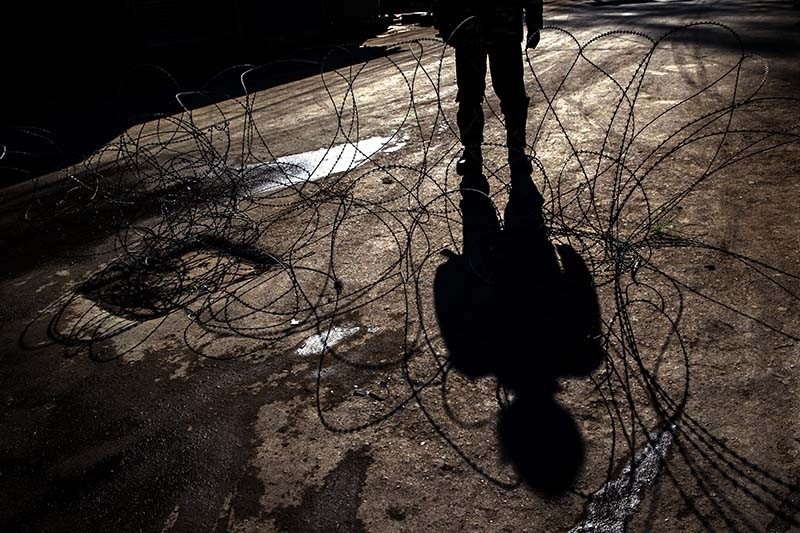 A shadow of an Indian paramilitary soldier is cast on barbed wire at a checkpoint during curfew in Srinagar, Indian controlled Kashmir (AP Photo)
by Anadolu Agency
Feb 14, 2017 12:00 am

Pakistan on Tuesday summoned a senior Indian diplomat to lodge a protest over the killing of three soldiers on the disputed Kashmir frontier.

"The deliberate targeting of civilians and soldiers is indeed condemnable and contrary to human dignity and international human rights and humanitarian laws", a foreign ministry statement read.

Islamabad urged New Delhi to respect a 2003 ceasefire understanding, investigate the latest and other incidents of ceasefire violations and instruct Indian forces to respect the truce.

Tensions between the two nuclear rivals have been running high since India accused Pakistan of having links to gunmen who killed 19 soldiers in Jammu and Kashmir in September last year, fueling the border clashes which have since killed nearly 90 soldiers from both sides.

Since 1989, Kashmiri resistance groups in Jammu and Kashmir have been fighting against Indian rule for independence, or for unification with neighboring Pakistan.

More than 70,000 people have reportedly been killed in the conflict so far, most of them by the Indian armed forces. India maintains more than half a million troops in the disputed region.