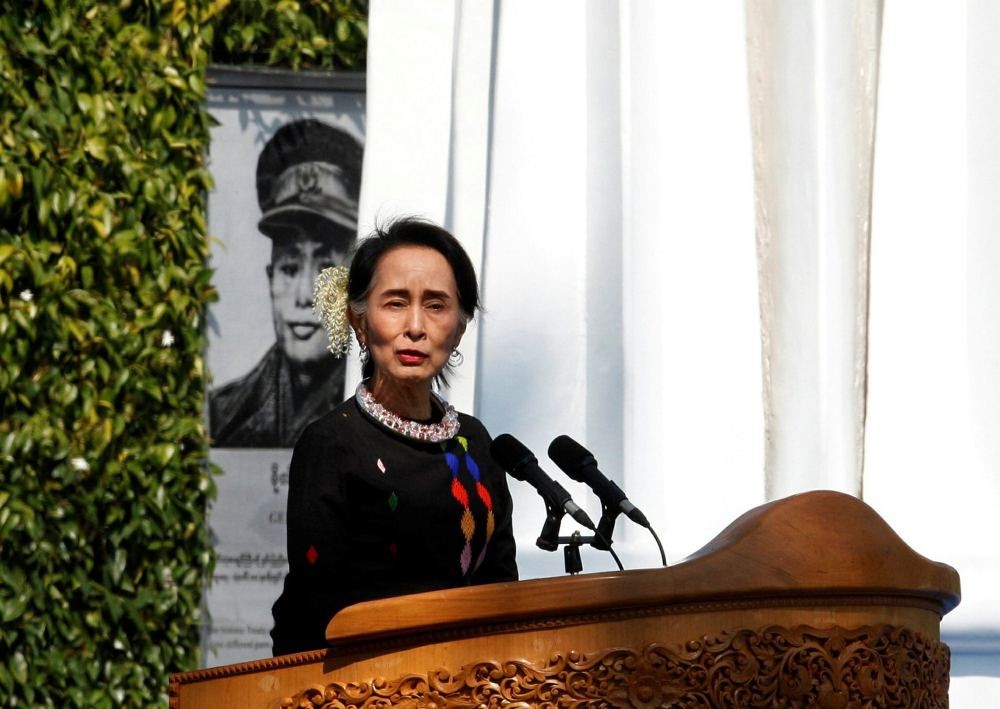 Myanmar State Counsellor Aung San Suu Kyi, standing by a portrait of her late father and national hero Gen. Aung San and the Panglong monument, delivers a speech during a ceremony to mark the 70th anniversary of Union Day in Panglong, Feb. 12.
by Yusuf Selman İnanç Feb 16, 2017 12:00 am

In a highly unrealistic move, Myanmar's leader Aung San Suu Kyi urged ethnic rebels to sign the cease-fire agreement with the government but ignored the persecution of millions of Rohingya Muslims

Myanmar's Nobel Laureate President Aung San Suu Kyi called on all armed groups to sign a ceasefire agreement and a deal for truce, despite the fact that she has long ignored the persecution of millions of Rohingya Muslims. Last weekend she said, "I want to ask those ethnic groups who haven't signed the nationwide cease-fire to trust yourselves and sign it and please participate in our 21st Century Panglong Conference." Her sentences read as if they addressed equal groups, fighting each other in the country, when in fact extremist Buddhists and the Myanmar army have been assaulting, killing, raping and displacing Rohingya Muslims in a the decades-long oppression that has gradually caused some armed insurgent groups to flourish, most of which are controlled by the diaspora.

After her speech, Myanmar declared that an investigation would be launched into the allegations, although no results have been achieved from previous probes. What is more, while the home ministry said a departmental inquiry would be conducted, but the Ministry is controlled by the army, which is the main target of the allegations. Touching on the U.N. report, Police Colonel Myo Thu Soe told Reuters on Monday that "The U.N. report provide many detailed accounts of what allegedly happened and that's why an investigation committee was set up to respond to the report with evidence." He added, "The U.N. report includes very serious human rights abuses allegations against police in Myanmar, including rape. However, as we know, it did not happen."

The country of Burma, renamed Myanmar in 1989, has refused to grant citizenship to Rohingyas ever since its establishment, issuing temporary identity cards, known as "white cards," to these internally displaced persons (IDPs). Amid increasing pressure from Buddhist extremists, the government canceled the Rohingyas' right to vote, previously granted in 2015, immediately before a constitutional referendum was held. Furthermore, the government interferes in every aspect of their daily lives; barring everything from the establishment of businesses to obtaining work and even marriage. Ongoing violence and discriminatory state policies compel Rohingyas to flee. While 140,000 currently live in refugee camps in Myanmar, 130,000 live in Malaysia and as many as 300,000 in Bangladesh, many of whom are unregistered immigrants who used smuggler boats to escape persecution. The Rohingyas have also begun to take refuge in Indonesia and a few thousand have already settled in the country.

A report released by Human Rights Watch, dated April 2013, asserted, "The criminal acts committed against the Rohingya and Kaman Muslim communities in the Arakan state since June 2012 amount to crimes against humanity carried out as part of a campaign of ethnic cleansing." A report issued by the International Crisis Group (ICG) in October, 2014, said the conflict began as result of several causes, namely, "The situation in the Rakhine state, which contains a toxic mixture of historical center-periphery tensions, serious intercommunal and interreligious conflict with minority Muslim communities as well as extreme poverty and underdevelopment." The U.N. has also issued a report recently, revealing how the Rohingyas are being persecuted.

The reports also show that there are no warring factions, as an army along with armed extremists carries out ethnic cleansing operations on the one side, and a minority group tries to survive on the other. Some armed groups have recently emerged in Myanmar to mobilize the Rohingyas against the systematic state oppression. For instance, a 2016 dated ICG report stated, "The insurgent group, which refers to itself as Harakah al-Yaqin [Faith Movement, HaY], is led by a committee of Rohingya émigrés in Saudi Arabia and is commanded on the ground by Rohingya with international training and experience in modern guerrilla war tactics." The group HaY is not strong and had not been accepted by the masses. The report adds that "HaY would not have been able to establish itself and make detailed preparations without the buy-in of some local leaders and communities. Yet, this has never been a radicalized population and the majority of the community, its elders and religious leaders have previously eschewed violence as counterproductive. The fact that more people are now embracing violence reflects deep policy failures over many years rather than any sort of inevitability."

For now, the Rohingyas have shunned violence and not joined radical groups. Yet, the more the state oppresses and the more people are displaced, the more the influence of the radical groups will increase. It is not realistic to make a call on ethnic groups to stop the fire while the army commits several atrocities and is tasked with investigating the atrocities.
RELATED TOPICS