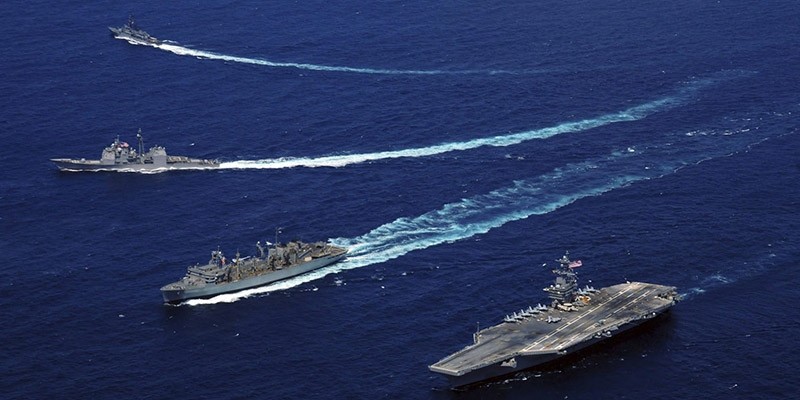 A United States aircraft carrier strike group has begun patrols in the South China Sea, the U.S. navy said on Saturday, amid renewed tension over the disputed waterway.

China asserts ownership of almost all of the resource-rich waters despite rival claims from several Southeast Asian countries. It has rapidly built reefs into artificial islands capable of hosting military planes.

The USS Carl Vinson aircraft carrier group was engaging in "routine operations in the South China Sea," the navy said in a statement on its website.

It noted that the ships and aircraft had recently conducted exercises off Hawaii and Guam to "maintain and improve their readiness and develop cohesion as a strike group."

"We are looking forward to demonstrating those capabilities while building upon existing strong relationships with our allies, partners and friends in the Indo-Asia-Pacific region," strike group commander Rear Admiral James Kilby said in the statement.

China's foreign ministry said ships and aircraft were allowed to operate in the area according to international law.

But Beijing "firmly opposes any country's attempt to undermine China's sovereignty and security in the name of the freedom of navigation and overflight," spokesman Geng Shuang told journalists Wednesday, responding to reports that the Vinson was headed to the South China Sea.

"We also urge the US to refrain from challenging China's sovereignty and security and to respect regional countries' efforts to maintain peace and stability in the South China Sea," he said.

The Vinson has deployed to the South China Sea 16 times in its 35-year history, the US Navy said.

Washington says it does not take sides in the territorial disputes but has several times sent warships and planes to assert freedom of navigation in the Sea, sparking protests from Beijing.

Brunei, Malaysia, the Philippines, Taiwan and Vietnam also claim parts of the waters that command strategic sea lanes and have rich fishing grounds, along with oil and gas deposits.