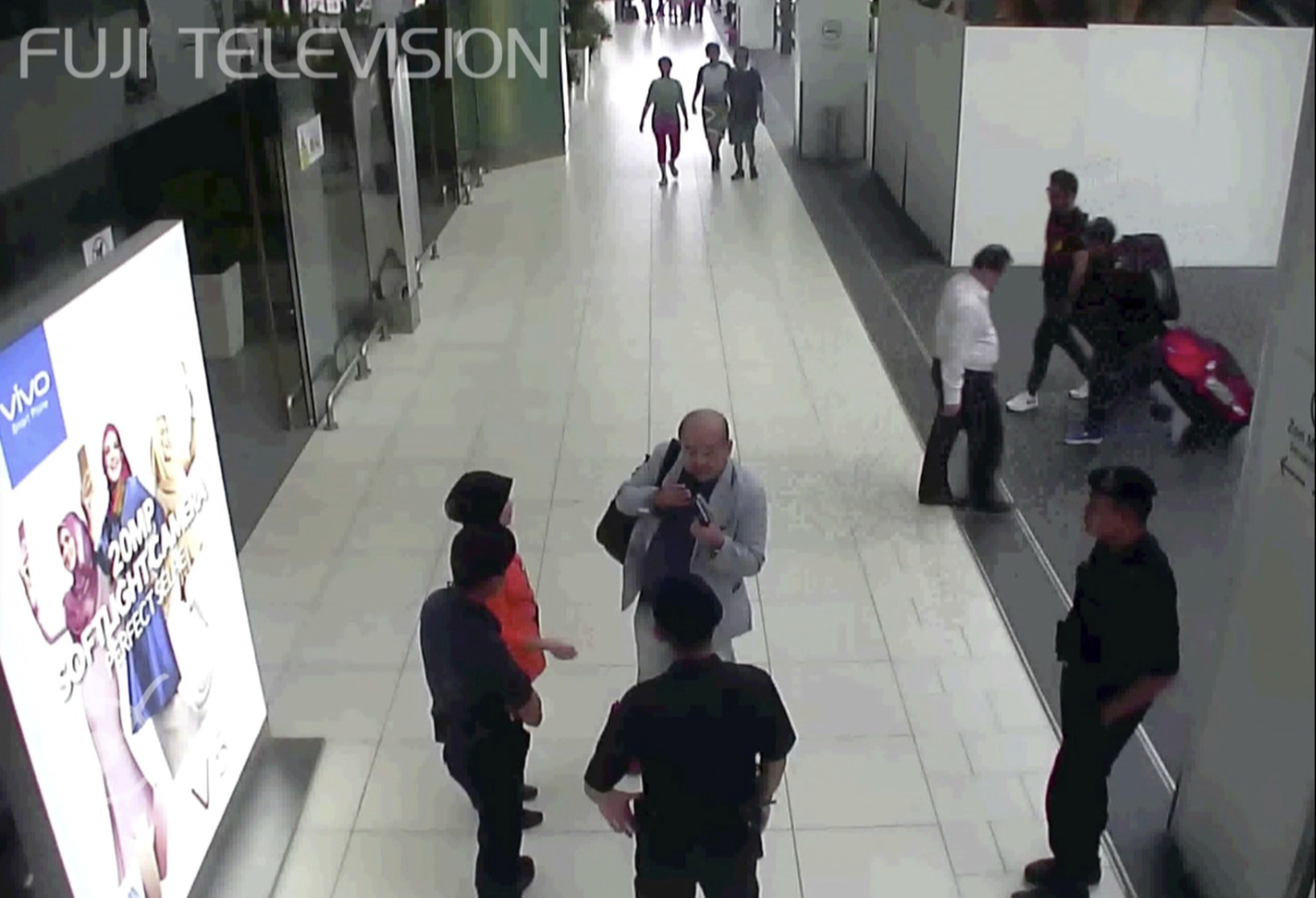 Footage from Kuala Lumpur airport security cameras obtained by Fuji TV, Kim Jong Nam talks to airport security and officials after he was attacked. (Fuji TV via AP)
by Associated Press Feb 21, 2017 12:00 am

Determining whether poison killed the half brother of North Korea's leader in a busy airport is proving difficult for Malaysian officials, who said Tuesday that autopsy results are so far inconclusive.

More than a week has passed since Kim Jong Nam was approached by two women at a budget air terminal in Kuala Lumpur and apparently attacked in the face with an unknown substance. Kim did not suffer a heart attack and had no puncture wounds, such as those a needle would have left, Director General of Health Noor Hisham Abdullah told reporters. He did not dismiss poison as a potential cause.

"We have to confirm with the lab report before we can make any conclusive remark," he said.

He added that medical specimens have been sent to experts for analysis. However, Rahmat Awang, director of Malaysia's National Poison Center in Penang, said he has not yet received any samples despite expecting them to arrive two days ago.

He said with a case this high-profile, specimens are likely being sent to his lab and to facilities abroad to seek the cause of death or confirm findings already reached in Kuala Lumpur.

Identifying a specific poison can be challenging, especially if a minute amount was used and it did not penetrate fat cells in the victim's tissue. If the toxin only entered the bloodstream, it could leave the body very quickly. And even if a substance is found, it would need to match the symptoms Kim Jong Nam experienced before death. The more unique the poison is, the harder it is to find.

"Our lab, for example, traces the usual chemicals," Awang said. "If the substance involved is not something we often see, the likelihood is that we might not be able to detect it."

Highly sophisticated facilities, such as in Japan or at the FBI's crime lab in the U.S., are among those that have greater capabilities for discovering unusual toxic substances.

The case has perplexed leading forensic toxicologists who study murder by poison. They say the airport attack is one of the most bizarre cases in the books, and question how the two women could walk away unscathed after deploying an agent potent enough to kill Kim Jong Nam before he could even make it to the hospital.

Some type of nerve gas or ricin, a deadly substance found in castor beans, have been suggested as possible toxins used. A strong opioid compound could also have been liquidized, though that would likely have incapacitated the victim immediately. Surveillance footage instead shows Kim walking calmly downstairs to the airport's clinic.

Kim, the older half brother of North Korea's reclusive ruler Kim Jong Un, had spent most of the past 15 years living in China and Southeast Asia. The victim is believed to have had at least three children with two women. No family members have come forward to claim the body.

The attack spiraled into diplomatic fury when Malaysia refused to hand over Kim Jong Nam's corpse to North Korean diplomats after his death, and proceeded with an autopsy over the ambassador's objections. The two nations have made a series of increasingly angry statements since then, with Malaysia insisting it is simply following its legal protocols, and North Korea accusing Malaysia of working in collusion with its enemy South Korea.

Seoul's spy agency believes North Korea was behind the killing, but has produced no evidence.

Malaysian Prime Minister Najib Razak told reporters Tuesday that the North Korean ambassador's remarks were "diplomatically rude" and said Pyongyang "should help us to find out the truth."

Isolated North Korea has a long history of ordering killings of people it views as threats to its regime. Kim Jong Nam was not known to be seeking political power; he was best known for his penchants for drinking, gambling and expensive restaurants. But his position as eldest son of the family that has ruled North Korea since it was founded could have made him appear to be a danger.

Police have so far arrested four people carrying identity documents from North Korea, Malaysia, Indonesia and Vietnam. Those held include two women who were allegedly seen approaching Kim Jong Nam on Feb. 13 as he stood in the departure hall at an airport ticketing kiosk.

One of the women, Doan Thi Huong, is from Nghia Binh, Vietnam, a farming and largely Catholic village about 130 kilometers (80 miles) south of Hanoi. Her father, Doan Van Thanh, said Tuesday he can't believe she would do such an "earthshaking" thing.

"She is my daughter and I understand her," he said in his simply furnished home. "She was scared of rats and toads. She would not have dared to do such thing."

Thanh said his daughter left the village about 10 years ago to study at a pharmaceutical school in Hanoi, and once told him she was working in communications. She occasionally visited home, most recently during the Lunar New Year holiday in late January.

Her niece, 18-year-old high school student Dinh Thi Quyen, said she believes Huong was duped into taking part. "My aunt is a very nice and kind person, but she could easily trust in other people," she said.

Quyen said Huong called her Feb. 14, one day after Kim's death, and asked for her help to put down a deposit on a dress she liked in a Hanoi shop.

The Indonesian woman arrested has said she was tricked into taking part in the attack, believing it was part of a comedy TV show stunt.

Grainy video from airport security cameras obtained by Japan's Fuji TV seems to show two women approaching Kim Jong Nam from different directions that morning, with one slipping up behind him and appearing to hold something over his mouth for a few seconds. Then the women turn and calmly walk off in different directions.

Kim Jong Nam, a heavyset man in his mid-40s, died soon after en route to a hospital after suffering a seizure, officials say. He was at the airport to fly to Macau, where he had a home.

Investigators are still looking for four North Korean men who arrived in Malaysia on different days beginning Jan. 31 and flew out the day of the attack.