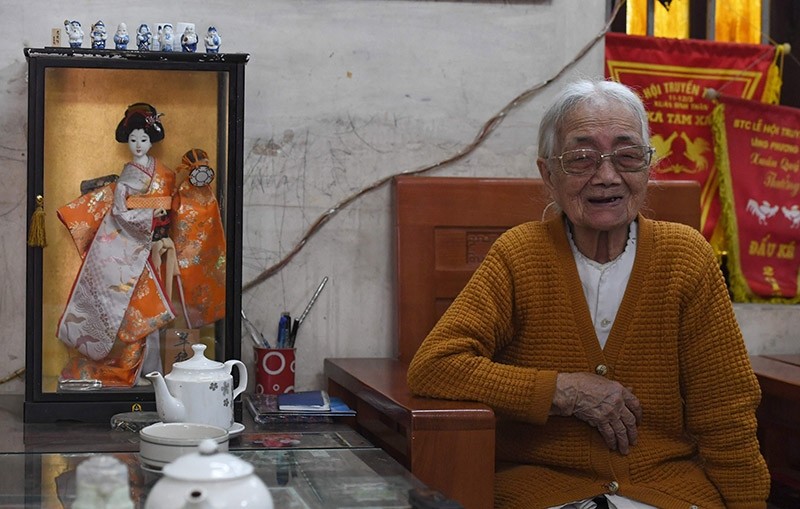 It's been more than sixty years since Nguyen Thi Xuan's husband, a Japanese soldier, left her in Vietnam, but the 94-year-old still sleeps with a body pillow she fashioned from his military uniform.

She is one of scores of Vietnamese women who fell in love with soldiers from Japan's occupying force, going on to carve a life with them at the end of the war.

But within a decade many of the men had abandoned them, often leaving their families in penury and facing accusations of treachery for setting up home with the enemy.

But Xuan has no axe to grind against the former occupiers -- least of all her husband.

"I miss him a lot. I can never forget my husband, because he was so nice," Xuan said in her farming Vinh Thanh village on the outskirts of Hanoi.

Japan's Emperor Akihito and Empress Michiko will meet with families -- including Xuan's -- next week on a historic trip to Vietnam, a landmark visit for the former foes that have become cosy allies since diplomatic relations were established in 1973.

Xuan was pregnant with her fourth child when her husband Shimizu left in 1954 and says she received no support from either government despite his service.

"We suffered a lot" since he left, Xuan said, clutching a photo of her husband, who adopted the Vietnamese name Nguyen Van Duc while living in the country.

"I don't know how we overcame that period. I still feel scared thinking of that difficult past," she added.

She met Shimizu in 1943 during the 1940-1945 Japanese occupation of Vietnam, which had previously been under French colonial rule.

They married soon after. The young couple could only afford to serve biscuits and sweets to guests at their small wedding.

After Japan's defeat in World War II, around 700 of its soldiers stayed on, many of them joining forces with Vietnam's revolutionary leader Ho Chi Minh in his fight to secure independence from the French.

After France was defeated in 1954, Shimizu was among the first wave ordered to return home by Japanese authorities, who refused to accept their Vietnamese wives or children.

But Xuan remembers her husband as a "very nice man".

"I made a pillow from a military jacket he left behind for me, covering it with a (Vietnamese) flag. I imagined my husband was the star," she said, smiling while referring to the red and gold cascade.

"It means he is with me all the time, in my sleep."

She lost track of him after he left in 1954, until the couple was reunited by Japanese journalists in 2006, 52 years after they bid a sad farewell.

He had remarried, but she remained single, working as a nurse, a nanny and a farmhand to raise their children.

Life wasn't easy for her half Japanese children in their small village.

"There was discrimination. I fought with local residents who bullied us, saying we were children of Japanese fascists," said her youngest son Binh, 62.

Today, Japan is a leading investor in Vietnam and the country's top aid donor. Thousands of Vietnamese students travel to Japan to study every year, many coming home speaking fluent Japanese.

Although none of Xuan's family has ever travelled there, Japan has shaped their lives.

Now in her twilight years, she still sings Japanese ballads she learned by heart and says she is eager to meet the emperor next week, offering no notes of bitterness.