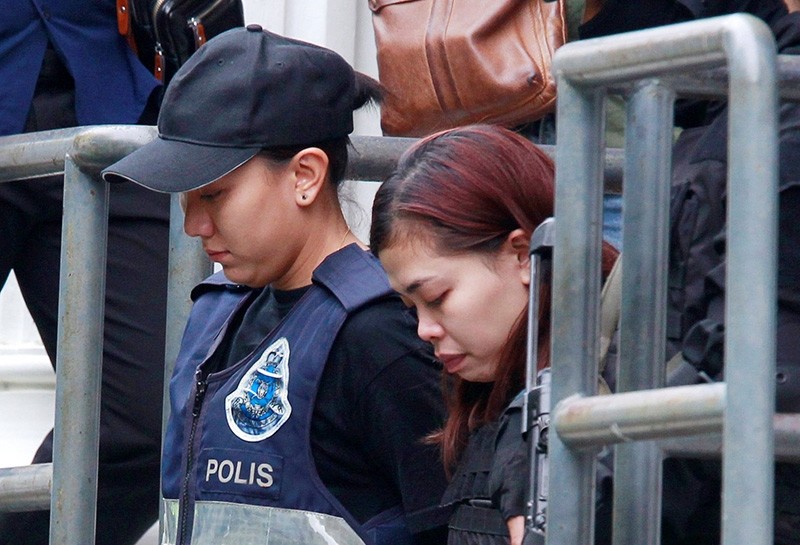 Indonesian Siti Aishah leaves a Sepang court after she was charged with the murder of North Korea Kim Jong Nam, in Malaysia March 1, 2017 (Reuters Photo)
by Compiled from Wire Services Mar 01, 2017 12:00 am

Indonesian Siti Aisyah, 25, and Doan Thi Huong, 28, from Vietnam, were surrounded by a heavy police presence as they were charged in court over the February 13 killing involving a deadly nerve agent.

Siti, wearing a red T-shirt, was brought in first to hear the murder charge read out before being taken away. Huong, also dressed casually, then heard the charge in Vietnamese.

The handcuffed women were both told they faced the death penalty if found guilty.

"I understand but I am not guilty," Vietnamese suspect Doan Thi Huong told the court in English after the murder charge was read. She looked briefly at the public gallery as she was led out and bowed her head.

The other suspect, Indonesian Siti Aisyah, nodded as her translator told her: "You are accused of murdering a North Korean man at the departure hall" of Kuala Lumpur International Airport. She was dressed in a red T-shirt and jeans.

The women did not enter pleas because the magistrate court where they appeared has no jurisdiction over a murder case. Lead prosecutor Iskander Ahmad told the court he will ask for the case to be transferred to a higher court and for both women to be tried together.

They face a mandatory death sentence if convicted.

Kim Jong Nam was attacked as he waited for his flight home to Macau on Feb. 13. He died shortly after two women went up behind him and wiped something onto his face.

Both women have reportedly said they thought they were part of a prank TV show playing harmless tricks on unsuspecting passengers. Aisyah told authorities that she was paid the equivalent of $90.