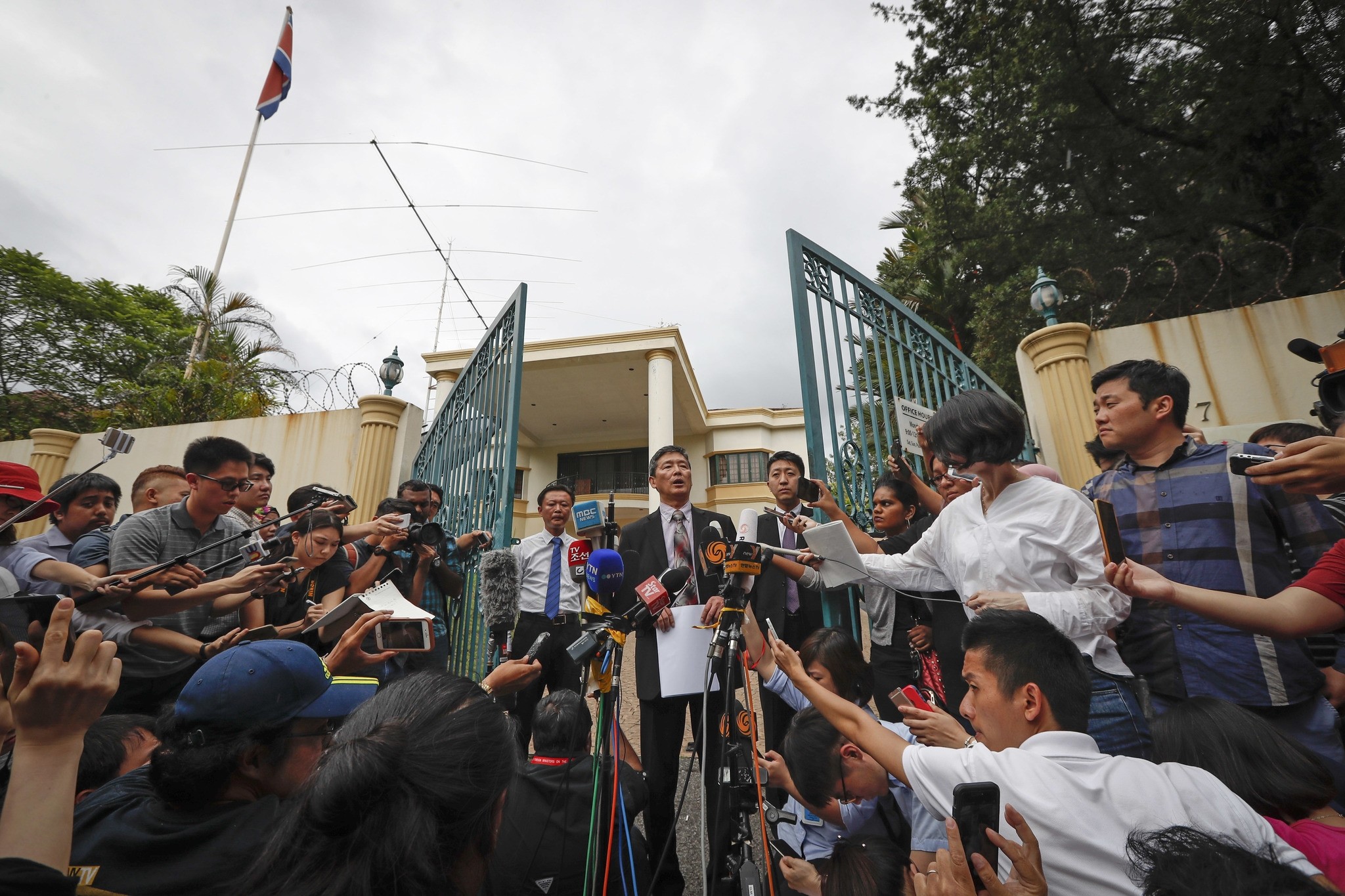 The death of Kim, the estranged half brother of North Korea's ruler, has unleashed a diplomatic battle between Malaysia and North Korea. The autopsy is especially sensitive because North Korea had asked Malaysia not to perform one, but authorities carried it out anyway, saying they were following the law.

Also Thursday, amid growing fallout from the killing, Malaysia announced it is scrapping visa-free entry for North Koreans.

The women, who were caught on grainy surveillance video, have been charged with murder. Both say they were duped into thinking they were playing a harmless prank.

North Korea has denied any role and accused Malaysia of bias.

On Thursday, Ri Tong Il, the former North Korean deputy ambassador to the United Nations, told a news conference that it made no sense to say the two women used such a deadly toxin without also killing or sickening themselves and people around them.

Ri said Kim had a history of heart problems and had been hospitalized in the past. He said he understood that Malaysian officials found medication for diabetes, heart problems and high blood pressure in Kim's belongings and concluded he wasn't fit to travel.

"This is a strong indication that the cause of death is a heart attack," Ri said.

"We have our experts who are qualified to determine the cause of death of Kim Chol. Our investigations, supported by expert reports, confirmed that Kim Chol was murdered. North Korea can say what they like but the facts remain," Khalid told AP.

Malaysian police said the attackers knew what they were doing and had been trained to go immediately to the bathroom and wash their hands. Police can't confirm whether the two women may have been given antidotes before the attack. An antidote, atropine, can be injected after exposure and is carried by medics in war zones where weapons of mass destruction are suspected.

The case has badly frayed once-warm ties between Malaysia and North Korea.

While it isn't one of North Korea's key diplomatic partners, Malaysia has been one of the few places in the world where North Koreans could travel without a visa. As a result, for years, it has been a quiet destination for Northerners looking for jobs, schools and business deals.

That could all change after Kim's death.

Deputy Prime Minister Ahmad Zahid Hamidi said the visa-free arrangement with North Korea will be scrapped starting Monday for national security reasons. He also slammed the North Korean ambassador in Kuala Lumpur, who has accused Malaysia of "trying to conceal something" and "colluding with hostile forces."

"We don't want to make enemies, but if they had used Malaysia for their own agenda, they should not accuse Malaysia and tarnish our image on the international stage," Zahid said. "We will act firmly to guarantee the safety of our people. Don't ever use Malaysia as a base to do anything you like."

Earlier Thursday, Malaysian authorities said they will release a North Korean man, Ri Jong Chol, from custody Friday because of a lack of evidence. Officials never said why they arrested him. But Malaysian Attorney General Mohamad Apandi Ali said he will be deported because he does not have valid travel documents.

Custody of Kim Jong Nam's body has become a point of contention between the two countries.

Malaysia has resisted giving up the body without getting DNA samples and confirmation from next of kin. Kim is believed to have two sons and a daughter with two women living in Beijing and Macau.

North Korea has unsuccessfully demanded that Malaysia hand the body over.

Malaysian authorities are seeking seven other North Korean suspects, four of whom fled the country on the day of Kim's death and are believed to be back in North Korea. Others sought include the second secretary of North Korea's embassy and an employee of North Korea's state-owned airline, Air Koryo.

Kim Jong Nam was estranged from his half brother, North Korean leader Kim Jong Un. He reportedly fell out of favor with their father, the late Kim Jong Il, in 2001, when he was caught trying to enter Japan on a false passport to visit Tokyo Disneyland.

Isolated North Korea has a long history of ordering killings of people it views as threats to its regime. Kim Jong Nam was not known to be seeking political power, but his position as eldest son of the family that has ruled North Korea since it was founded could have made him appear to be a danger.

"North Korea is a society ruled in terror. For a big decision like killing Kim Jong Nam, no one could make a decision like that except Kim Jong Un," he said in a broadcast from Seoul, South Korea.

Thae was the deputy head of the North Korean Embassy in London until last year, when he fled to South Korea, becoming the most senior diplomat to switch sides.