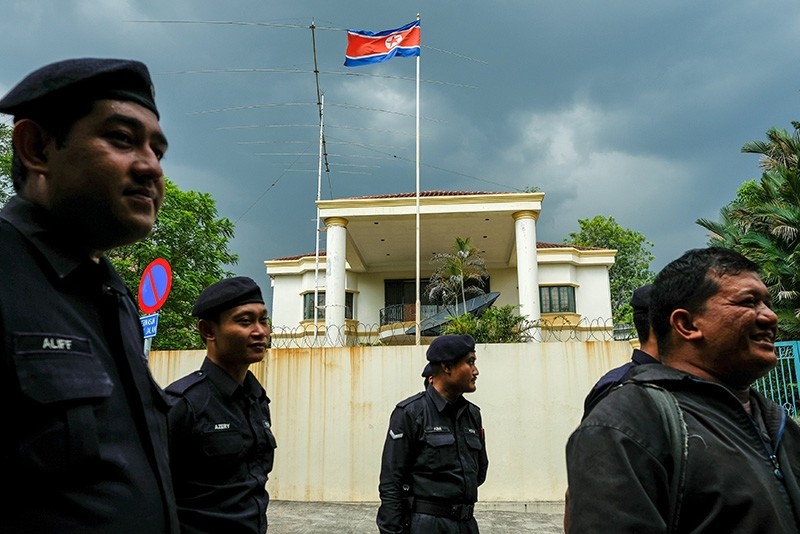 Malaysian police officers gather before a protest organized by members of the youth wing of the National Front, Malaysia's ruling coalition, in front of the North Korea embassy, in Kuala Lumpur, Malaysia, Feb. 23, 2017. (Reuters Photo)
by Mar 04, 2017 12:00 am

Malaysia said Saturday it would expel the North Korean ambassador in a deepening diplomatic row over the assassination of the half-brother of Pyongyang's leader at Kuala Lumpur International Airport.

"The ambassador has been declared persona non grata," Malaysia's foreign ministry said in a statement, adding it had demanded but not received an apology over Pyongyang's attack on its investigation of the case.

"The expulsion of the DPRK (North Korea) Ambassador is... an indication of the government's concern that Malaysia may have been used for illegal activities," the statement added.

Foreign Minister Anifah Aman said in a statement that a notice was sent to the North Korean Embassy on Saturday saying Ambassador Kang Chol must leave the country within 48 hours.

Kim Jong-Nam, 45, was poisoned last month with VX, a nerve agent so deadly that it is classed as a weapon of mass destruction.

South Korea has blamed the North for the murder, citing what they say was a standing order from leader Kim Jong-Un to kill his exiled half-brother who may have been seen as a potential rival.

North Korea, which has not acknowledged the dead man's identity, has vehemently protested the investigation, saying Malaysia is in cahoots with its enemies.

In response, Malaysia has cancelled a rare visa-free travel deal with North Korea -- a key conduit to the outside world -- and recalled its envoy to Pyongyang, putting the skids under once cozy ties.