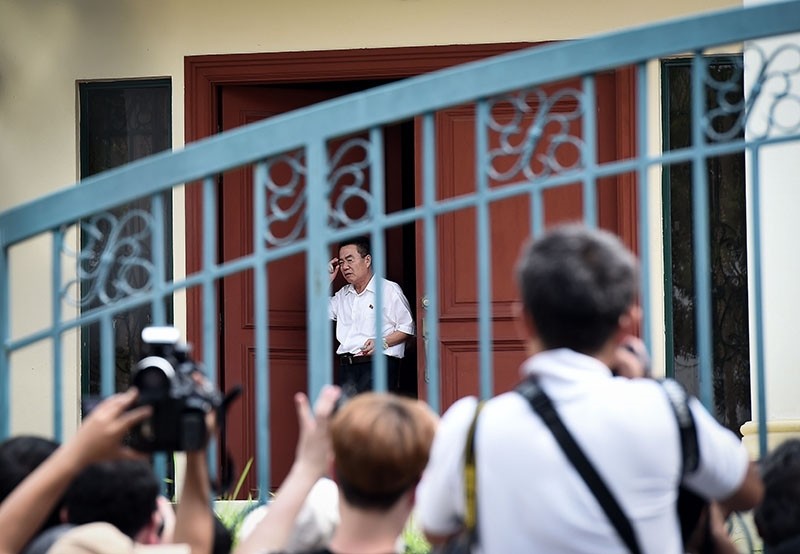 Malaysia has expelled North Korea's ambassador, giving him 48 hours to leave the country in a major break in diplomatic relations over the airport assassination of the half-brother of Pyongyang's leader.

Kim Jong-Nam was poisoned February 13 with deadly nerve agent VX. North Korea has not acknowledged the dead man's identity but has repeatedly disparaged the murder investigation, accusing Malaysia of conniving with its enemies.

"The ambassador has been declared persona non grata" after Malaysia demanded but did not receive an apology for Pyongyang's attacks on the investigation, Malaysia's Foreign Minister Anifah Haji Aman said.

"Malaysia will react strongly against any insults made against it or any attempt to tarnish its reputation," he said in a statement released late Saturday.

Ambassador Kang Chol failed to present himself at the ministry when summoned and "is expected to leave Malaysia within 48 hours," the statement added.

On Sunday morning, media besieged Pyongyang's embassy, from where Kang is expected to depart before the expulsion deadline expires 6pm on Monday.

Arch-rival South Korea has blamed the North for the murder, citing what they say was a standing order from leader Kim Jong-Un to kill his exiled half-brother who may have been seen as a potential rival.

The foreign ministry said the expulsion is "part of the process by the Malaysian government to review its relations" with North Korea, which before Kim's assassination were unusually cosy.

The expulsion shows "we are serious about solving this problem and we do not want it to be manipulated," he added.

Kang then claimed the investigation was politically motivated and said Kuala Lumpur was conspiring with "hostile forces".

Malaysia issued a February 28 deadline for an apology, but "no such apology has been made, neither has there been any indication that one is forthcoming."

Malaysia has also recalled its envoy to Pyongyang and cancelled a rare visa-free travel deal with North Korea.

Police are seeking seven North Korean suspects in their probe but on Friday released the only North Korean arrested for lack of evidence.

After Ri Jong-Chol was deported, he claimed police offered him a comfortable life in Malaysia for a false confession, saying the investigation was "a conspiracy to impair the dignity of the Republic (North Korea)".

Two women -- one Vietnamese and one Indonesian -- have been charged with murdering Kim Jong-Nam, with airport CCTV footage showing them approaching the heavyset 45-year-old and apparently smearing his face with a cloth.

North Korea had few friends even before the assassination, but the fallout from the killing looks set to further isolate the nuclear-armed state.

Malaysia formally established diplomatic relations with North Korea in 1973 and opened an embassy in Pyongyang in 2003.

It has provided a conduit between Pyongyang and the wider world in recent years, with Kuala Lumpur serving as a discreet meeting place for talks between the regime and the United States.

A recently released report by a UN Panel of Experts reviewing compliance with sanctions against Pyongyang identified a front company run by North Korean intelligence out of Malaysia, selling military communications equipment to Eritrea, with suppliers in China and an office in Singapore.

Up to 1,000 North Koreans currently work in Malaysia and their remittances are a valuable source of foreign currency for the isolated regime.

Last week Malaysia's trade minister Mustapa Mohamed said the spat would have no impact on Kuala Lumpur as trade with the reclusive country is "insignificant".