US rejects China's call to halt joint drills with SKorea 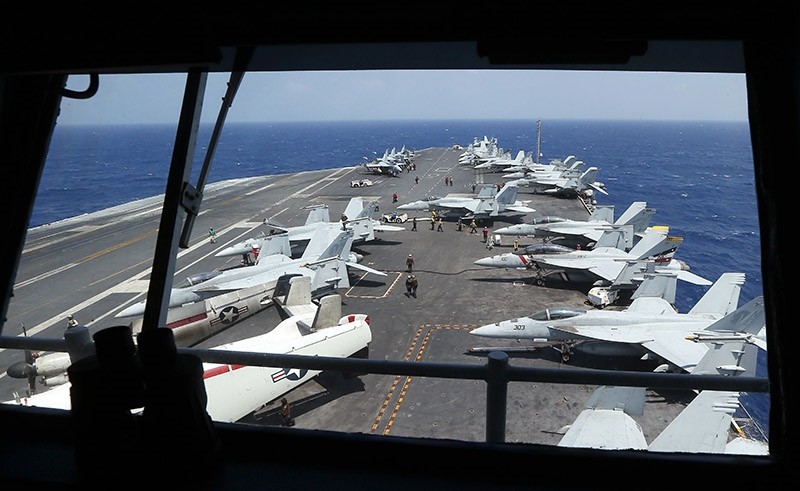 The U.S. ambassador to the United Nations, Nikki Haley, told reporters after an emergency Security Council meeting on North Korea's latest ballistic missile launches that the United States must see "some sort of positive action" by Kim's regime before discussing ways to reduce tensions on the Korean Peninsula.

"They've given us enough reason to think how irresponsible that they are that we ever try and think that we're dealing with a rational person on this," she said.

Earlier Wednesday, Chinese Foreign Minister Wang Yi proposed the freeze-for-freeze, likening escalating tensions between the North and Washington and Seoul to "two accelerating trains, coming toward each other with neither side willing to give way."

The idea was rejected by South Korea and Japan as well as the U.S.

She also defended the upcoming deployment of a U.S. missile defense system in South Korea, a move that has been strongly opposed by China. She said America would not leave its ally facing the threat from North Korea without help.

"We have not seen any goodwill at all coming from North Korea," Haley said. "I appreciate all my counterparts wanting to talk about talks and negotiations, (but) we are not dealing with a rational person."

With any other country, the United States would be seeking negotiations, she said.

Haley said the United States is re-evaluating how it is going to deal with North Korea going forward "and we are making those decisions now and will act accordingly."

"We're not ruling anything out and we're considering every option that's on the table," she said.

South Korean Ambassador Cho Tae-yul also rejected the idea of a North Korean nuclear freeze in exchange for halting U.S.-South Korea military exercises, which he stressed are defensive in nature.

"Linking this exercise to anything else, which is illegal nuclear and missile provocation by North Korea, is inappropriate and unacceptable, and I think this is just trying to link the unlinkable," he said.

"All kinds of options have been exhausted so far," Cho said, "So the only available means to change the North Korean behavior fundamentally is to continue to keep up the pressure and sanctions on North Korea."

Japan's U.N. ambassador, Koro Bessho, said that "at the starting point we need some assurances they are serious about the denuclearization."

"So Japan's position is that it's not freeze-for-freeze but it's denuclearization that we're looking for," Bessho said.

But Chinese Ambassador Liu Jieyi warned that "if you look at ... the development of events now on the Korean Peninsula there's a real danger, there's a real risk."

The alternative to China's proposal "would be escalation of tension, and the situation may get out of control," he told The Associated Press and two other reporters.

"We should avoid any worsening of the situation, or still any conflict, any sparks triggering a larger-scale conflict or even war on the Korean Peninsula," Liu said. "That's not something that's in the interest of anyone."

He said implementing China's proposal "shouldn't be hard" if there is political will, but "it would take the agreement of all the sides to get this result."

When asked whether China had a commitment from North Korea to freeze testing, he told the AP that "we have been talking to various parties concerned about this."

Haley said talks are one option on the table for U.S. consideration along with many others that she declined to specify. She said other Security Council members would also all be discussing with their capitals what to do next on North Korea.

Japan's Bessho said three of the missiles launched Sunday night landed in his country's exclusive economic zone where fishermen troll for squid. He said the North Korean military unit that conducted the launches is tasked with striking U.S. military bases in Japan when necessary.

"This shows us they are serious in these aggressive actions," Bessho said, calling the North's actions "a serious matter for the whole world."

He welcomed the Security Council's reaction late Tuesday, which was stronger than after previous launches.

The council strongly condemned the North's missile tests, "increasingly destabilizing behavior" and defiance of the council's resolutions. It said the missile activity increases tensions in the region and beyond, and risks a regional arms race.

The Security Council has already imposed six rounds of increasingly tougher sanctions on North Korea. It urged all countries to "redouble efforts" to implement them and warned of possible "further significant measures."

Speaking on behalf of Britain, Rycroft said it's "very important that the first step" come from North Korea to demonstrate its commitment to denuclearization.

China's Liu told the AP the Security Council must follow the situation closely "but it is key that the main players in the region refrain from doing anything that would exacerbate the current highly tense situation on the Korean Peninsula."