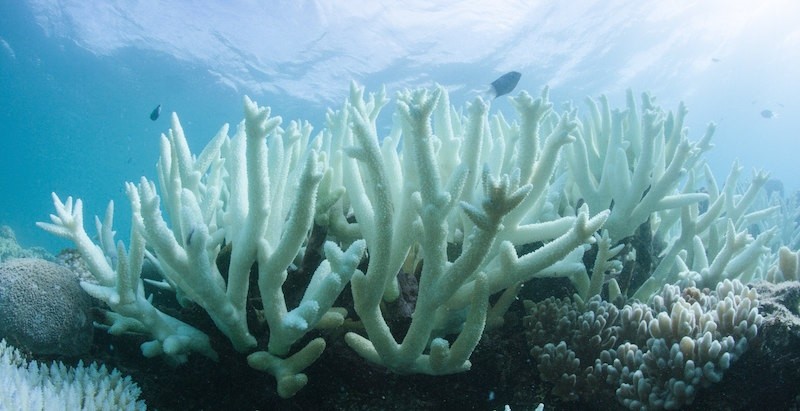 The Great Barrier Reef suffering mass coral bleaching for a second year in a row, at Vlassoff Cay, near Cairns, Australia. (AFP Photo)
by Mar 10, 2017 12:00 am

The 2,300-kilometre (1,400-mile) reef suffered its most severe bleaching on record last year due to warming sea temperatures during March and April.

"Regrettably, the temperatures have been high on the Great Barrier Reef this summer as well and unfortunately [we] are here to confirm... a mass coral bleaching event for the second consecutive year," the Authority's reef recovery director David Wachenfeld said in a Facebook video.

"And importantly, this is the first time we've ever seen the Great Barrier Reef bleached two years in sequence. We've seen heat stress build since December."

The 2016 bleaching was more severe in the northern areas of the bio-diverse site.

The back-to-back occurrence of widespread bleaching also meant there was insufficient time for corals to fully recover, Neal Cantin from the Australian Institute of Marine Science said.

"We are seeing a decrease in the stress tolerance of these corals," Cantin said in a statement.

"This is the first time the Great Barrier Reef has not had a few years between bleaching events to recover. Many coral species appear to be more susceptible to bleaching after more than 12 months of sustained above-average ocean temperatures," Cantin added.

Bleaching occurs when abnormal environmental conditions, such as warmer sea temperatures, cause corals to expel tiny photosynthetic algae, draining them of their color.

Coral can recover if the water temperature drops and the algae are able to recolonise them.

The Barrier Reef -- already under pressure from farming run-off, development and the crown-of-thorns starfish -- escaped with minor damage after two other bleaching events in 1998 and 2002.

Canberra narrowly avoided UNESCO putting the reef on its endangered list in 2015, and has committed more than Aus$2.0 billion (US$1.5 billion) to protect it over the next decade.

Nearly two-thirds of shallow-water corals in a 700-kilometre stretch of the reef's northern section were lost to last year's bleaching event, scientists have said.