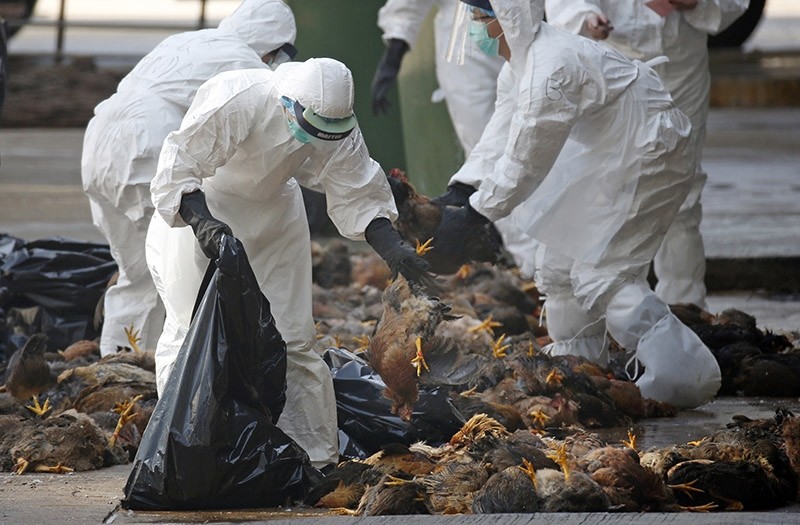 In this Wednesday, Dec. 31, 2014 file photo, health workers in full protective gear collect dead chickens killed by using carbon dioxide, after bird flu was found in some birds at a wholesale poultry market in Hong Kong. (AP Photo)
by Mar 13, 2017 12:00 am

China reported 61 fatalities and 160 cases of human infection from H7N9 bird flu in February, the government said on Monday, much higher than in previous years and bringing the death toll in this winter's outbreaks to 161 since October.

While the total for last month was lower than January's 79, it was the highest number for the month of February since the deadly strain was first identified in 2013, according to data from the National Health and Family Planning Commission.

The death toll from bird flu infections tends to drop towards the end of the winter.

The data highlights the scale of the spread of the virus among humans, even after Chinese disease control experts have warned the public to stay on alert. South Korea and Japan are also battling their own major outbreaks and have culled millions of chickens.

The H7N9 strain shows little or no symptoms in poultry, a factor which has limited the number of birds culled in the world's third-largest producer of broiler chickens and the second-biggest consumer of poultry.

The total of 140 for first two months of 2017 alone already surpasses the annual totals for avian flu in China in recent years. In 2010, 147 people died of the H1N1 strain of the virus.