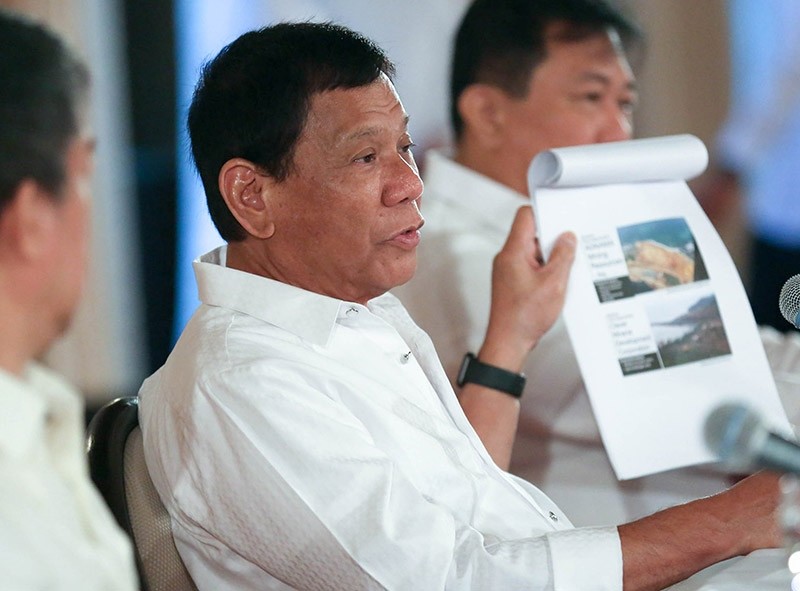 President Rodrigo Duterte said Monday he has told the military to assert Philippine ownership of a large ocean region off the country's northeastern coast where Chinese survey ships were spotted last year, in a discovery that alarmed Philippine defense officials.

Duterte said he ordered the military to assert ownership of Benham Rise in a friendly way, repeating that his country has no option but to be diplomatic because "I cannot match the might of China."

"My order to my military, you go there and tell them straight that this is ours, but I say it in friendship," Duterte said in a news conference when asked about the issue in the waters facing the Pacific Ocean.

Beijing and Manila have a separate long-running territorial feud in the South China Sea west of the Philippines, but tensions have eased considerably since Duterte took office in June and began reaching out to China. He has placed the dispute on the backburner while seeking Chinese trade and economic aid.

The Philippine military spotted the Chinese survey ships crisscrossing the Benham Rise waters suspiciously from July to December last year, Defense Secretary Delfin Lorenzana said last week. He said the government is considering an increase in patrols and the building of territorial markers in the offshore region.

The Chinese ships' presence in the area was to be discussed late Monday at a meeting of National Security Council executive members and Duterte.

The Department of Foreign Affairs said it asked China through its embassy Friday to clarify what the survey ships were doing in Benham Rise.

In 2012, the U.N. Commission on the Limits of the Continental Shelf declared Benham Rise to be part of the Philippine continental shelf, where the country has exclusive rights to fish and exploit resources, including undersea deposits of oil and gas, Philippine officials said.

The Chinese foreign ministry has said its ships have a right to pass through the area under international law.

In the South China Sea, Duterte has scuttled plans made under his predecessor for joint Philippine patrols with the U.S. Navy in disputed waters to avoid offending China. A U.S. Navy aircraft carrier, the USS Carl Vinson, has been sailing on a mission to ensure freedom of navigation in the sea, claimed virtually in its entirety by China.

"America wants to pick a fight there," said Duterte, who has openly criticized U.S. security policies. "Why would I get into a trouble in that area?''