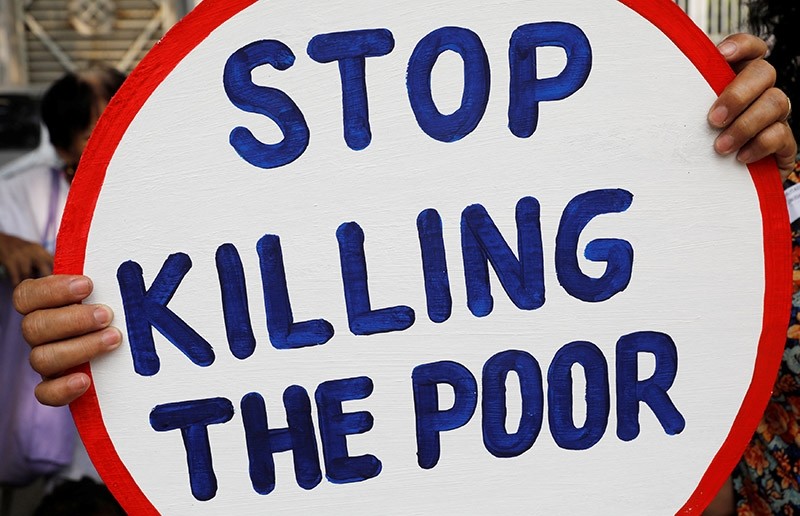 A family member of a victim in President Rodrigo Duterte's drug war holds a placard during a prayer rally in Quezon city, Metro Manila, Philippines March 14, 2017. (Reuters Photo)
by Associated Press Mar 16, 2017 12:00 am

A Philippine lawmaker filed an impeachment complaint against President Rodrigo Duterte on Thursday because of the thousands of deaths that have happened in his anti-drug crackdown and for alleged corruption, although the bid faces an uphill battle with Duterte's allies holding an overwhelming majority in Congress.

Rep. Gary Alejano said the complaint he filed at the House of Representatives alleges Duterte violated the constitution and betrayed the public trust with his actions, including the crackdown that has sparked extrajudicial killings of drug suspects and because of a failure to declare huge bank deposits as required by law.

"We are of the firm belief that President Duterte is unfit to hold the highest office of the land and that impeachment is the legal and constitutional remedy to this situation," said Alejano, who was accused of involvement in a failed coup attempt several years ago.

Although opposition lawmakers lack the numbers to impeach Duterte, Alejano said there was a need to stop his "excesses and crimes." More than 260 of the 292 House members belong to a pro-Duterte bloc.

"Around 8,000 have been killed already," Alejano said, referring to the estimated number of mostly drug suspects killed in the crackdown Duterte launched after taking office last June.

House Speaker Pantaleon Alvarez, a Duterte ally, called the impeachment bid "stupid," saying without elaborating that it was based on fabricated allegations.

Alejano's complaint cited Duterte's speeches, where he threatened drug lords with death and encouraged law enforcers and civilians to shoot drug suspects if they fight back, and recent Senate testimony by retired police officer Arturo Lascanas and a former militiaman Edgar Motabato, who said they were members of a death squad under Duterte when he was mayor of southern Davao city.

Lascanas and Matobato separately testified they were involved in hundreds of killings of drug suspects and political opponents of Duterte in Davao. Duterte has denied he condoned extrajudicial killings.

Duterte has not responded in detail to the allegations, and his allies have questioned the credibility of the two men.