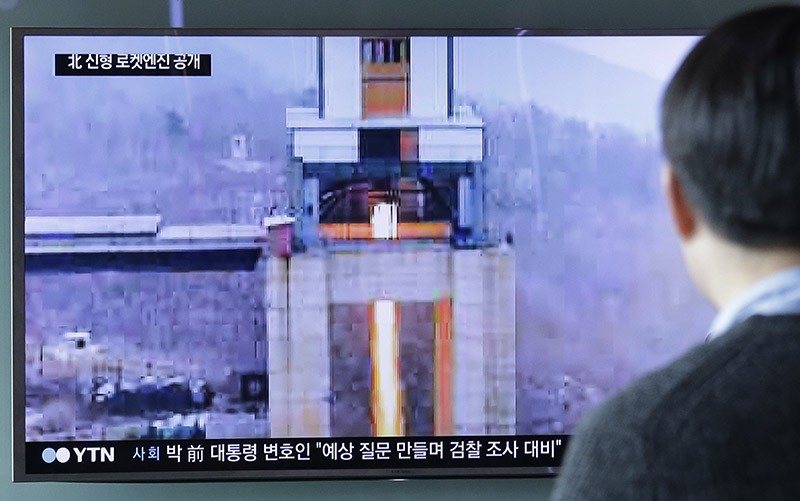 North Korea has conducted a ground test of a new type of high-thrust rocket engine that leader Kim Jong Un is calling a revolutionary breakthrough for the country's space program, the North's state media said Sunday.

Kim attended Saturday's test at the Sohae launch site, according to the Korean Central News Agency, which said the test was intended to confirm the "new type" of engine's thrust power and gauge the reliability of its control system and structural safety.

Kim called the test "a great event of historic significance" for the country's indigenous rocket industry, the KCNA report said.

He also said the "whole world will soon witness what eventful significance the great victory won today carries" and claimed the test marks what will be known as the "March 18 revolution" in the development of the country's rocket industry.

The report indicated that the engine is to be used for North Korea's space and satellite-launching program.

North Korea is banned by the United Nations from conducting long-range missile tests, but it claims its satellite program is for peaceful use, a claim many in the U.S. and elsewhere believe is questionable.

North Korean officials have said that under a five-year plan, they intend to launch more Earth observation satellites and what would be the country's first geostationary communications satellite — which would be a major technological advance.

Getting that kind of satellite into place would likely require a more powerful engine than its previous ones. The North also claims it is trying to build a viable space program that would include a moon launch within the next 10 years.

The test was conducted as U.S. Secretary of State Rex Tillerson was in China on a swing through Asia that has been closely focused on concerns over how to deal with Pyongyang's nuclear and missile programs.

It's hard to know whether this test was deliberately timed to coincide with Tillerson's visit, but Pyongyang has been highly critical of ongoing U.S.-South Korea wargames just south of the Demilitarized Zone and often conducts some sort of high-profile operation of its own in protest.

Earlier this month, it fired off four ballistic missiles into the Sea of Japan, reportedly reaching within 200 kilometers (120 miles) of Japan's shoreline.

Japan, which was Tillerson's first stop before traveling to South Korea and China, hosts tens of thousands of U.S. troops.

While building ever better long-range missiles and smaller nuclear warheads to pair with them, North Korea has marked a number of successes in its space program.

It launched its latest satellite — the Kwangmyongsong 4, or Brilliant Star 4 — into orbit on Feb. 7 last year, just one month after conducting what it claims was its first hydrogen-bomb test.

It put its first satellite in orbit in 2012, a feat few other countries have achieved. In 2013, rival South Korea launched a satellite into space from its own soil for the first time, though it needed Russian help to build the rocket's first stage.