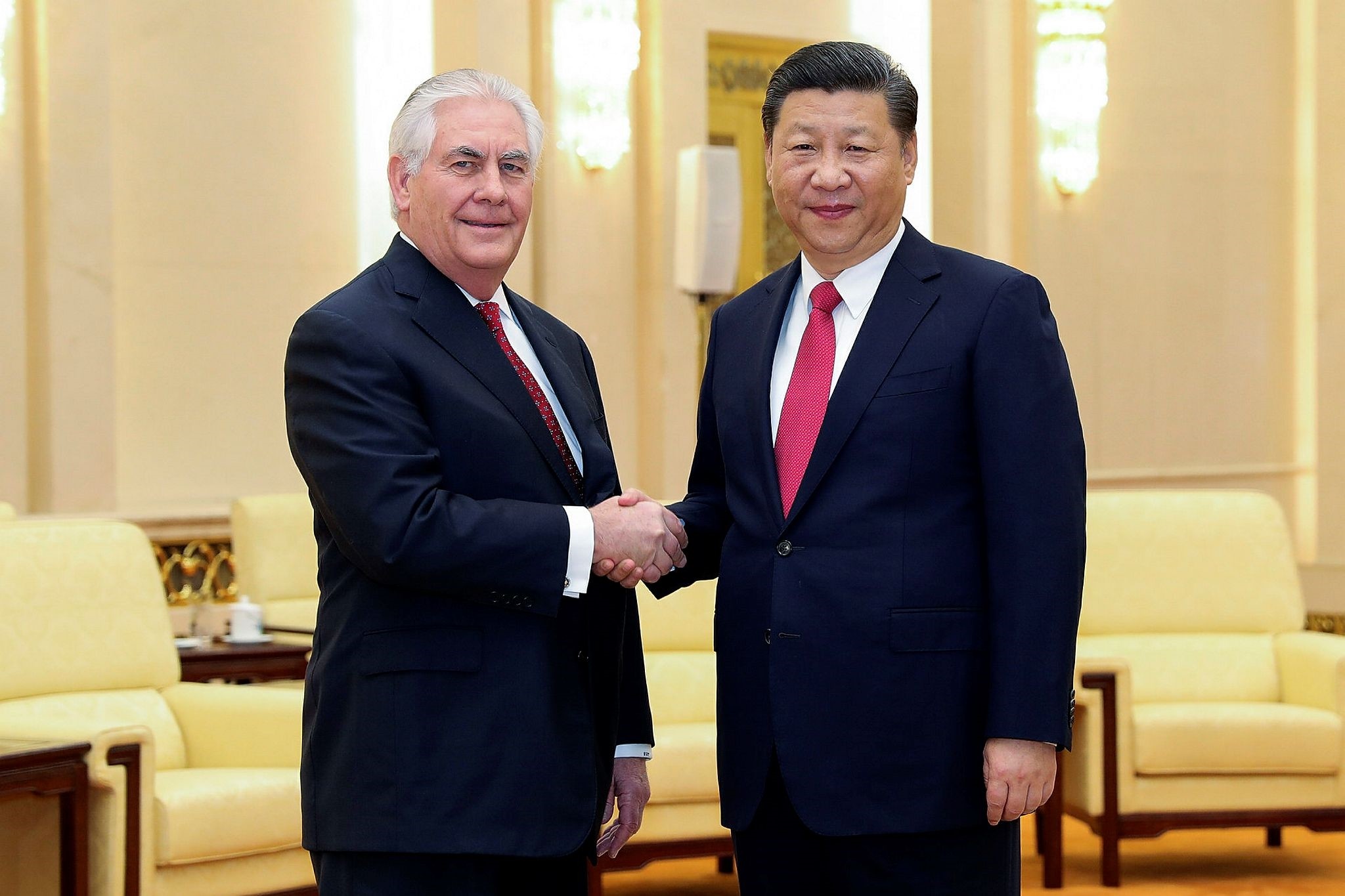 U.S. Secretary of State Rex Tillerson visited East Asia over the weekend and also met with the president of the People's Republic of China Xi Jinping to reaffirm and strengthen Sino-American relations

Former ExxonMobil CEO and Secretary of State Rex Tillerson met with his Chinese counterpart, Wang Yi, as well as the Chinese president over the weekend. Both sides expressed their wish to strengthen relations and deepen cooperation. However, the North Korean problem and the PRC's military expansion into the South China Sea is stressing the bilateral talks.

Donald Trump's rhetoric on China has not drastically changed over the course of the last year and a half as he has accused China of artificially devaluing its currency and also wished to "bring back jobs" from the country. Due to his victory in the 2016 election, he accepted a phone call from Taiwan President Tsai Ing-wen, which was seen as an insult by China and a compromise of the "One China" policy that has guided Sino-American relations since the Nixon administration.

Since then, President Trump has reaffirmed the policy but later accused China of not doing enough against the threat of North Korea after its regime launched a missile during Japanese Prime Minister Shinzo Abe's visit to the United States in February.

Despite apparent difficulties, Donald Trump and China's Xi bilaterally reassured each other that they were willing to cooperate, and Rex Tillerson's visit to the East Asian nation seems to be the first step in doing so.

Undeterred by U.N. sanctions, Pyongyang has made no secret of its intense desire to acquire, test and use a nuclear arsenal as a bargaining chip against its perceived enemies, such as South Korea. Its regime, under the 33-year-old Kim Jong-Un, has conducted a total of five nuclear tests, in 2006, 2009, 2013 and twice in 2016 alongside an ever-increasing number of short and intermediate range ballistic missile tests since the mid-1990s.

Since Donald Trump took office, North Korea has launched five missiles between the seas of Japan and the Korean peninsula, which has prompted the U.S. president to accuse Beijing of not doing enough. He took to Twitter, saying: "North Korea is behaving very badly. They have been 'playing' the United States for years. China has done little to help!"Trump also reaffirmed America's alliance with Japan, saying that "the USA Stands behind Japan, its great ally, 100 percent" in a joint press conference with the Japanese prime minister after the first North Korean missile test in 2017.

The PRC began a campaign to militarize the highly disputed waters of the South China Sea when, in 2009, it submitted a new map to the U.N. showing the notorious "Nine-Dash Line," which claims most islands in the region. Initially, the Chinese claimed their expansion was made for scientific and research purposes, but satellite photographs show an active militarization and buildup of reefs into artificial island bases on which long range surface-to-air HQ-9 missiles have been strategically positioned. Beijing has created some 13 square kilometers (3,200 acres) of new land, according to the Asia Maritime Transparency Initiative.

Rex Tillerson reassured President Xi over the weekend that both himself and President Trump are "expecting a new era for constructive development" in bilateral relations between the two powers.

"You said that China-U.S. relations can only be friendly. I express my appreciation for this," Xi said, and was then told by Tillerson that Trump puts great value into the conversations the two leaders have already had. "He looks forward to enhancing that understanding in the opportunity for a visit in the future," Tillerson said.

Hours before their meeting, the North Koreans had conducted the test of a new rocket engine and declared the "new birth" of its rocket industry. Tillerson declared that, regarding North Korea, "all options are on the table."

The extent of Sino-American cooperation regarding North Korea is yet unknown, but since the two have pledged cooperation to each other further escalation is unlikely for now.