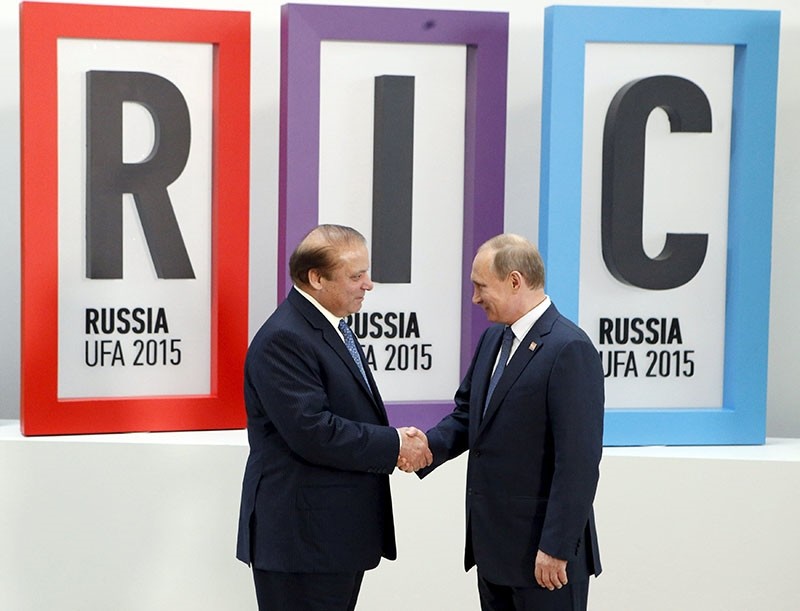 Shared strategic interests, new regional alignments and reduced role of the U.S. in the Middle East are major factors behind the growing military cooperation between Pakistan and Russia, according to Pakistani analysts.

Ikram Sehgal, a Karachi-based defense and security expert, said the two otherwise longtime foes, which have fought each other through proxies in neighboring Afghanistan in the 1980s, have found "a lot of common interests" to boost their defense ties in recent years,

"Moscow's growing defense and economic cooperation with Islamabad is part of its greater agenda in the Middle East, where the U.S. is reducing its influence, whereas Russia is calling the shots," Sehgal, who is also the editor of the Pakistan Defense Journal, told Anadolu Agency.

According to the analyst, Moscow had traditionally relied only on Syria and Egypt for its role in the Middle East; however, of late it has reduced its reliance on the two old allies, and focused on making a new regional alignment involving Turkey, Iran, Pakistan, China and to an extent even Afghanistan.

"The new U.S. administration is not seen as much interested in reviving its dwindling role in the Middle East and South Asia, which Moscow sees as an opportunity to take the lead," Sehgal added.

Referring to the upcoming multi-nation conference on Afghanistan in Moscow on April 14, he said: "The U.S. has refused to attend the forthcoming conference, which in my opinion, is not a wise decision as all the major players in the war-stricken country, including Pakistan, Russia, Turkey, China, and the Afghan government are taking part."

The analyst also said the U.S. and NATO's recent allegations about Russia and Pakistan allegedly providing arms and safe havens to the Afghan Taliban as another commonality of interests between the two sides.

He also noted that Russia had not abandoned its old ally in the region, India, which Pakistan sees as its arch rival.

Pakistan is set to receive four Mi-35 attack helicopters from Russia for $153 million in 2017.

The two countries also held their first ever joint military exercise in Pakistan in October 2016 despite India's reservations, which is seen as yet another reflection of the growing relations between the two militaries.

The joint exercise was part of a defense cooperation agreement signed in November 2014 to promoting international security; intensification of counterterrorism efforts and arms control activities; and strengthening collaboration in various military fields.

"Peace in Afghanistan is something that is equally important for both countries. Unfortunately, Moscow in the past had played a negative role, but now, I believe it is playing a positive role vis-a-vis peace in Afghanistan, for which Pakistan is a common denominator."

Recent developments in the region, especially the enhanced defense relations between the U.S. and India also forced Pakistan to look for new options, Masood said.

"Some latest developments have forced Moscow and Islamabad to rely on each other. Pakistan has found Russia as yet another option along with China to counter India's growing defense partnership with the U.S.

"While, Russia also knows the fact that Pakistan's cooperation is a must for its [Russia's] peace efforts in Afghanistan," he said.

Moscow's longtime desire of having access to "warm waters" is seen as another factor behind the increased strategic cooperation between Moscow and Islamabad.

The term "warm waters" had been coined during the then Soviet Union invasion of Afghanistan in the 1980s, suggesting access to Pakistan's strategic seawaters and ports was Moscow's actual motive behind its military moves.

"Russia has realized the fact that what it could not get through war [in Afghanistan], it can now get through dialogue and strategic partnership," Sehgal said citing Moscow's deep interest in the multi-billion-dollar China-Pakistan Economic Corridor (CPEC) project.

The corridor, which is part of Beijing's most ambitious foreign economic initiative -- One Belt One Road -- aims to connect northwest China to Pakistan's southwestern Gwadar port through a network of roads, railways and pipelines to transport cargo, oil and gas. This route will provide the shortest route to Chinese cargo destined for the Middle East, Central Asia and Africa.

Pakistan has reportedly recently agreed to give Russia access to the Gwadar port for trade activities, with Moscow planning to lay a railway track between the port and the northwestern Chaman border.