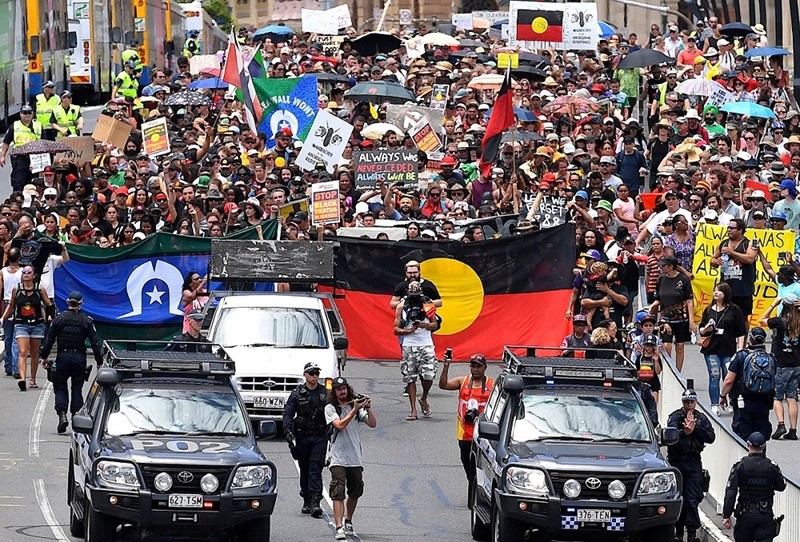 An Aboriginal protester holding a placard outside the Australian Prime Minister's Office (Reuters Photo)
by Compiled from Wire Services Apr 03, 2017 12:00 am

The prevalence of racism against Aboriginal and indigenous people in Australia is "deeply disturbing," a senior United Nations official said Monday after her two-week visit to assess the human rights situation in the country.

"This (racism) manifests itself in different ways, ranging from public stereotyped portrayals of them as violent criminals, welfare profiteers and poor parents, and to discrimination in the administration of justice," Tauli-Corpuz said.

She also criticized the "incredibly high rate of incarceration" of Aboriginal and indigenous people, including women and children, saying it is "a major human rights concern."

"The compounded effect of these policies has contributed to the failure to deliver on targets in the areas of health, education and employment," Tauli-Corpuz said in Canberra, the capital, at the end of a two-week visit to Australia.

Tauli-Corpuz was critical of Australia's decision to channel aid through the office of Prime Minister Malcolm Turnbull, describing the process as "bureaucratic, rigid and (having) wasted considerable resources on administration".

She said as part of her tour through the country, Aboriginal doctors and patients had told her about experiencing racism within the medical sector. She also said institutional racism was identified as an issue in the government's health plan.

In addition, Tauli-Corpuz said the country's mainstream education system contained "inadequate components" on Aboriginal history and the impact of colonization.

"The non-recognition of the socio-economic exclusion and the inter-generational trauma of indigenous peoples sadly continues to undermine reconciliation efforts," Tauli-Corpuz said.

A spokesman for Australia's Senator Nigel Scullion, the minister for indigenous affairs, did not immediately respond to requests for comment on the remarks, made to reporters.

Australia this year said it was falling short of almost every target to improve the lives of its indigenous population, from reducing the infant mortality rate, to getting children into school and adults in jobs.