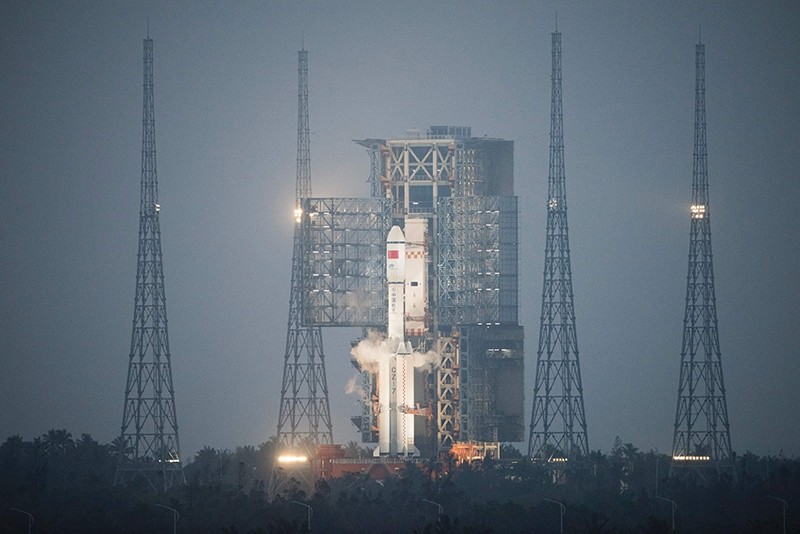 A Long March 7 orbital launch vehicle carrying China's cargo spacecraft Tianzhou-1 is seen at its launch pad at the Wenchang Space Launch Centre before it's scheduled launch in Wenchang (AFP Photo)
by Compiled from Wire Services Apr 20, 2017 12:00 am

China has launched its first unmanned cargo spacecraft on a mission to dock with the country's space station.

The Tianzhou 1 blasted off at 7:41 p.m. (1141 GMT) Thursday atop a latest-generation Long March 7 rocket from China's newest spacecraft launch site, Wenchang, on the island province of Hainan.

It is programmed to conduct scientific experiments after reaching the now-crewless Tiangong 2, China's second space station. A pair of Chinese astronauts spent 30 days on board the station last year.

China launched the Tiangong 2 precursor facility in September and the station's 20-ton core module will be launched next year. The completed 60-ton station is set to come into full service in 2022 and operate for at least a decade.

The spacecraft is designed to dock with the Tiangong 2 space laboratory, or "Heavenly Palace 2", where two astronauts spent a month last October in China's longest ever manned space mission.

The cargo spacecraft mission will provide an "important technological basis" for the construction of China's space station, according to state media.

The spacecraft can carry 6 tons of goods, 2 tons of fuel and can fly unmanned for three months, state media said.

Despite the advances in its space program for military, commercial and scientific purposes, China still lags behind the United States and Russia.

In late 2013, China's Jade Rabbit rover landed on the Moon to great national fanfare, but ran into severe technical difficulties.

The U.S. Defense Department has highlighted China's increasing space capabilities, saying it was pursuing activities aimed at preventing other nations from using space-based assets in a crisis.

China insists it has only peaceful ambitions in space, but has tested anti-satellite missiles.