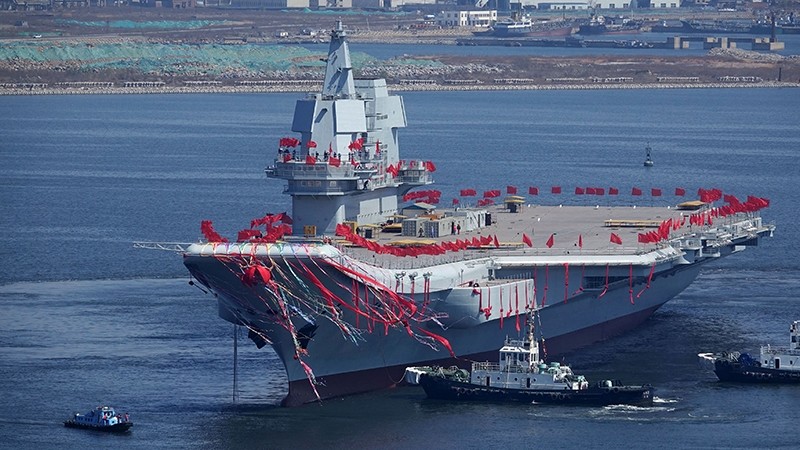 China on Wednesday launched its first domestically built aircraft carrier, which will join an existing one bought second-hand from the Ukraine, amid rising tensions over North Korea and worries about Beijing's assertiveness in the South China Sea.

The new carrier, with its deck decorated with red flags, was transferred from dry dock into the water during a ceremony at the shipyard in Liaoning province where it had been built, the Xinhua news agency reported.

The new carrier, which is currently referred to as Type 001A, is 315 metres long and 75 metres wide, and has a displacement of about 70,000 tons and a cruising speed of 31 knots.

It is slightly bigger than the Liaoning carrier, but their outlines are similar, according to The Paper, a Chinese state-owned publication.

Type 001A is expected to be able to carry about eight more aircraft than the Liaoning, which can carry up to 24 fighter jets and 17 helicopters, according to the Center for Strategic and International Studies, a Washington-based think tank.

State media said the carrier, designed in China and built in the northeast port of Dalian, is not expected to enter service until 2020.

Meanwhile, a third aircraft carrier, the Type 002, is being built in Shanghai.

Type 002 will be "far more advanced" than the first two carriers, according to the state-owned Global Times. It will look more like a US carrier than a Russian one as it will have no ski ramp, using catapult technology instead.

Aircraft catapults, currently used on US Navy carriers, use steam pressure to launch aircraft from the carrier's flight deck. But Russian carriers are generally fitted with ski-jump ramps - curved ramps that allow aircraft to build up velocity and take off from shorter runways.

The aircraft carriers are a sign of China's ambition to build a naval presence worldwide, observers say.

In order to achieve that, China would need to build a total of five to six aircraft carriers in the next 15 to 20 years, Zhao Chu, director of the Shanghai Institute for National Defense Strategy, told dpa.

"In that case, two carriers could be always on duty on the open water, one could be placed in a dock, and one could be undergoing maintenance," Zhao said.

China eventually should have two carrier strike groups stationed in the West Pacific and two in the Indian Ocean in order to protect its territories and overseas interests, Yin Zhuo, a senior researcher at the PLA Navy Equipment Research Center, told Global Times.

Partner nations such as Pakistan and Sri Lanka would need to allow for the Chinese Navy's presence in their waters in order for that to happen, Yin said. China currently has one overseas logistics base in Djibouti.

China also plans to increase its navy personnel from about 20,000 to 100,000 marines, according to reports. The navy's expansion is part of a larger overhaul of China's military that is championed by President Xi Jinping.

"In the past, we mainly focused on defence in our neighbourhood," Zhao said. "But after the 18th Party Congress [a top-level political meeting in November 2012], the new goal is to aim for a global strategy where China can take action in international affairs."

China has a long way to go, however, to match the world's largest naval force, the US Navy, which currently operates 10 aircraft carriers as well as dozens of destroyers and submarines.