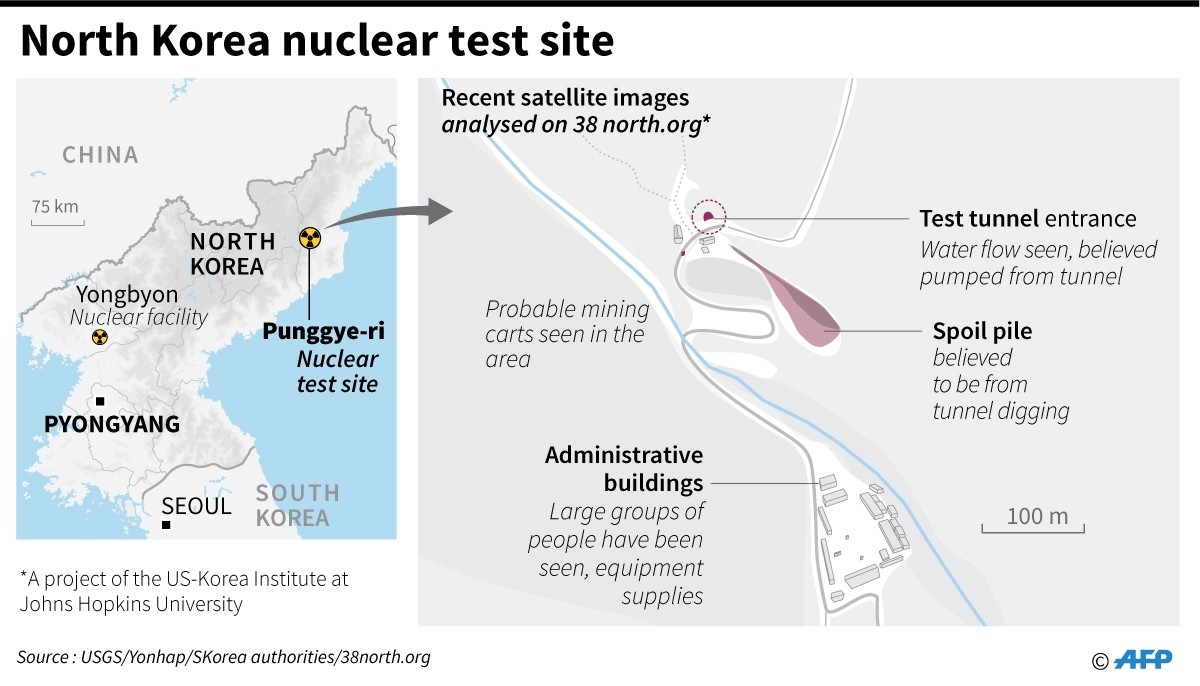 by May 04, 2017 12:00 am
Satellite images indicate activity has resumed at North Korea's nuclear test site, US-based analysts said Tuesday, as tensions remain high over fears of a sixth atomic test by the reclusive state.

Images of the Punggye-ri site captured on April 25 appear to show workers pumping out water at a tunnel believed to have been prepared for an upcoming nuclear test, monitoring group 38 North said.

It also noted that a large number of personnel were seen throughout the facility, with some groups possibly playing volleyball, in what is very likely a propaganda scene.

"It is unclear if this activity indicates that a nuclear test has been cancelled, the facility is in stand-by mode or that a test is imminent," said the researchers from the US-Korea Institute at Johns Hopkins University.

Workers were also observed playing volleyball at the guard barracks and two other areas at the site in satellite pictures taken on April 19 and 21.

38 North said the latest images were "unusual and almost assuredly a component of an overall North Korean deception and propaganda effort" and the result of media reporting on the earlier volleyball sightings.

North Korea is on a mission to develop a long-range missile capable of hitting the US mainland with a nuclear warhead, and has so far staged five nuclear tests, two of them last year.

Punggye-ri is a complex of tunnels and testing infrastructure in the mountains in the northeast of the country.

38 North said last month that Punggye-ri was "primed and ready" to conduct a test, amid mounting speculation that Pyongyang would act to coincide with major anniversaries including the birthday of regime founder Kim Il-Sung.

On Monday it said it would carry out a nuclear test "at any time and at any location" set by its leadership.

US President Donald Trump said this week he would be "honored" to meet North Korean leader Kim Jong-Un under the right conditions, dialling down earlier threats of military action.

Washington is now exploring options at the UN Security Council to ramp up pressure on the North, with diplomats saying it was in discussion with China on possible sanctions.

Over the past 11 years, the Security Council has imposed six sets of sanctions on Pyongyang, including imposing a cap on coal exports among other measures in November.