Nepalis go to polls in first local elections in 20 years 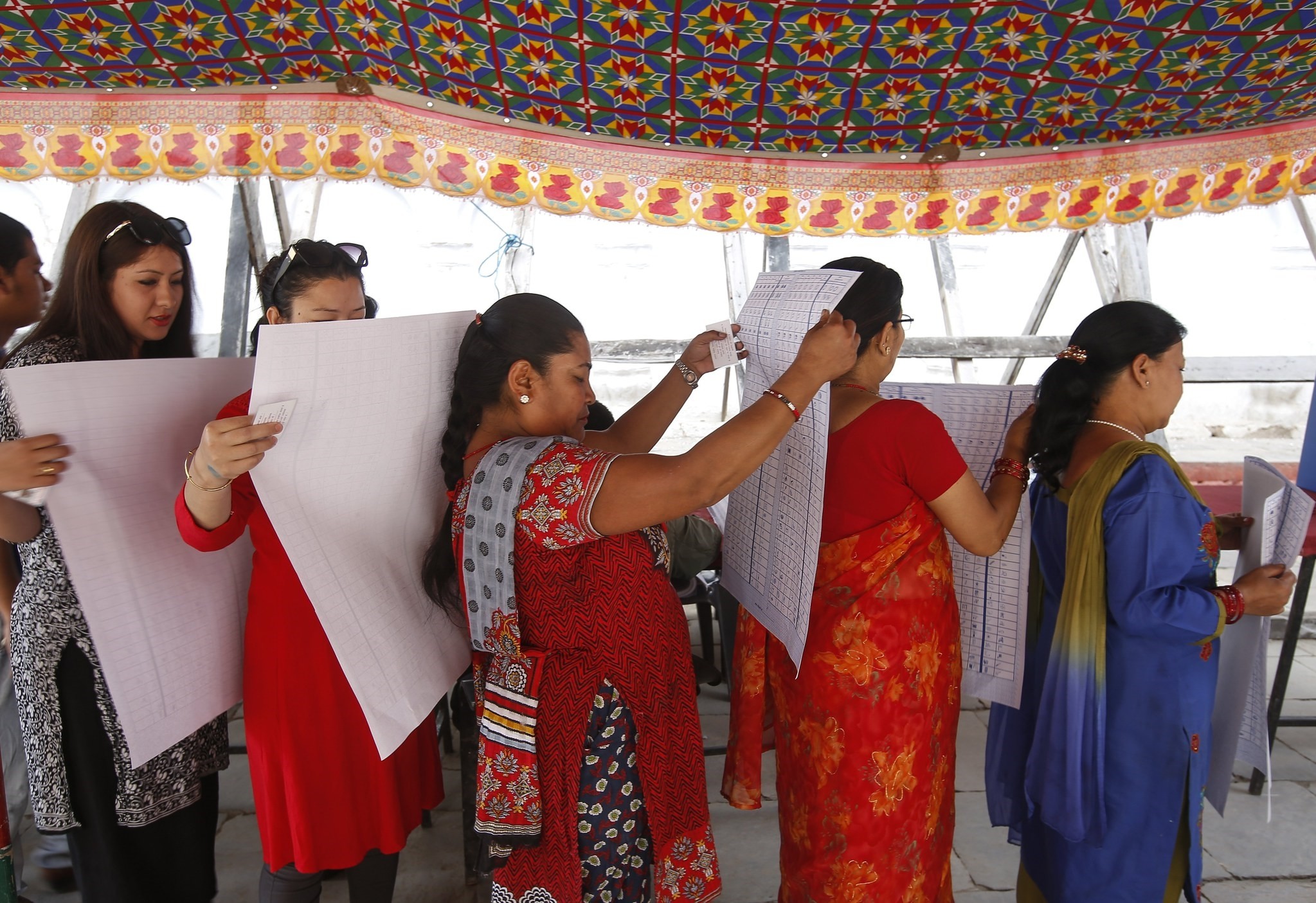 Nepalese women read polling information prior to casting their ballot at a polling station in Kathmandu Durbar Square in Kathmandu, Nepal, 14 May 2017. (EPA Photo)
by French Press Agency - AFP
May 14, 2017 12:00 am

Nepal held local-level polls on Sunday, the first since 1997 and a key step in its rocky road to democracy more than a decade after a civil war ended.

Around a third of registered voters across three provinces were eligible to vote, with the rest of the country due to do so in a month's time.

The Election Commission estimated turnout of at least 71 percent as preliminary data trickled in Sunday evening.

The vote has been split into two phases because of unrest in the southern plains bordering India, where the minority Madhesi ethnic group is refusing to take part until an amendment to the constitution is passed.

Local representatives were last elected in 1997 and their five-year terms expired at the height of the brutal Maoist insurgency.

The 10-year war ended in 2006 and the country began a fraught transition from a Hindu monarchy to a secular federal republic, which has seen it cycle through nine governments.

The long gap between polls has left an institutional void at the local level and graft has become a way of life in Nepal, hampering the delivery of basic services as well as the recovery from a devastating 2015 earthquake.

"It is difficult to expect much from our politicians -- they have always been selfish and not worked for the people -- but I hope that with this election things will change," housewife Shova Maharjan, 41, told AFP after casting her vote in the capital.

With nearly 70 percent of the population aged under 35, many were voting for their local representatives for the first time.

Polls opened at 7:00 am (0115 GMT) and closed at 5:00 pm, with each voter casting a ballot for seven local representatives: mayor, deputy mayor, ward chairman and four ward committee members.

The ballot paper in the capital Kathmandu -- one of the largest constituencies -- was around one metre long (three feet) to accommodate the 878 candidates.

Nearly 50,000 candidates were standing for election across 283 local municipalities in the first phase. Many registered as independents or with a number of small reformist parties hoping to grab some votes from the traditional political heavyweights.

While the youth vote is seen as key in undermining the grip of the three main political parties, the elderly were also out in force, including an 105-year-old man who cast his ballot in Gorkha, the epicentre of the 2015 earthquake, according to the election commission.

There were sporadic reports of violence on Sunday, with one person killed when police opened fire on a group attempting to raid a polling station in Dolakha district, 180 kilometres (110 miles) northwest of the capital Kathmandu, police told AFP.

A bomb was also found early Sunday outside the house of a mayoral candidate for the main opposition CPN-UML party in Bhaktapur, 15 kilometres east of Kathmandu. It was defused.

The remaining four provinces, considered potential flashpoints for election-related violence, will vote in the second phase on June 14.

But with results expected from Sunday's vote later this week, observers have expressed concern that the first phase will influence the outcome of the second.

As part of the deal that ended the civil war, a new constitution was written and finally adopted in September 2015.

The charter mandated that local elections, followed by provincial and then national elections, be held by January 2018 -- the final step in the drawn-out peace process.

But the constitution sparked protests by the Madhesi community -- who say the document leaves them politically marginalised -- and led to a months-long blockade of the India-Nepal border in 2015 that caused a crippling shortage of goods across the country.

The Madhesi threatened to boycott the local polls unless the constitution is amended. This forced the government to split the vote into two phases.

The government has promised a vote on an amendment to the constitution after Sunday's election, but the fragile ruling coalition is struggling to get a majority in parliament to pass the bill.