Mattis to focus on Pyongyang as US tests anti-ICBM technology 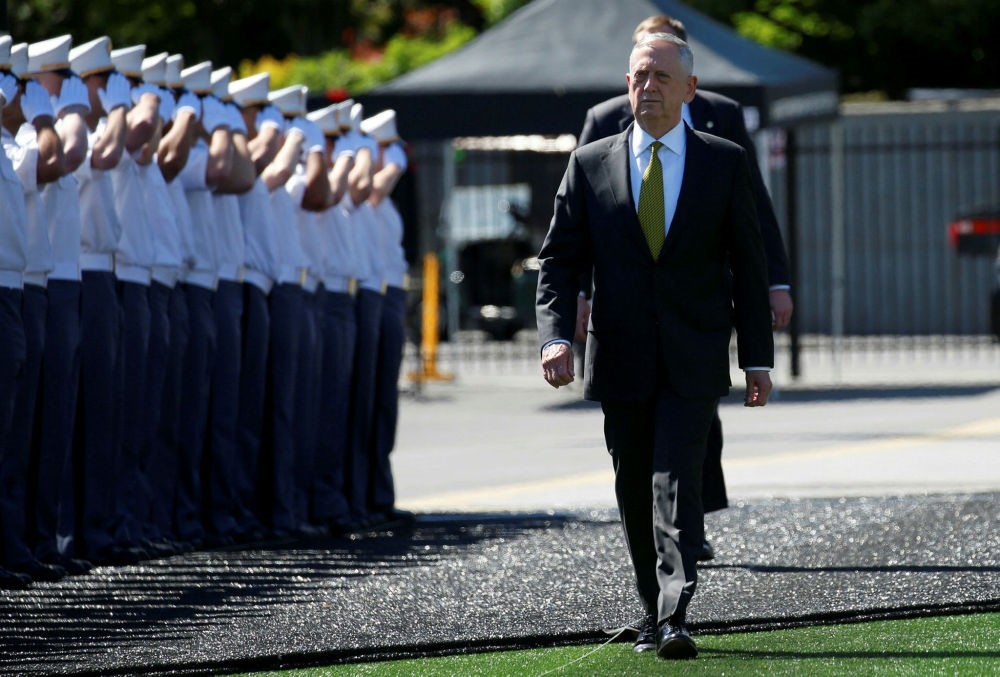 U.S. Secretary of Defense James Mattis walks past saluting cadets as he arrives for commencement ceremonies at the United States Military Academy in West Point, New York, May 27.
by Compiled from Wire Services Jun 01, 2017 12:00 am

U.S. Defense Secretary Jim Mattis is expected to press for greater cooperation to contain North Korea's nuclear and missile threat at a regional security forum in Singapore later this week, where, for years, Washington has sought to spotlight China's expansion in the strategic South China Sea

President Donald Trump has actively courted Chinese support on North Korea. The building of islands is seen as a move by China to solidify its contested claims in the sea, one of the world's busiest shipping lanes.

A U.S. Navy challenge to China's South China Sea claims last week may have allayed some of the concerns over broader American engagement. Asian officials and diplomats are still hoping for a clearer articulation of Trump's policy when Mattis speaks in Singapore on Saturday.

Abraham Denmark, a former deputy assistant secretary of defense for East Asia, said that while Mattis's focus would have to be on North Korea, perhaps Trump's most pressing security worry, it was important for him to lay out a broader policy to ease worries.

"The region will pay very close attention ... and the goal for Secretary Mattis should be to clearly enunciate the policy of the United States towards the Asia-Pacific," he said.

U.S. focus on Pyongyang has been sharpened by dozens of North Korean missile launches - the most recent of which was on Monday - and two nuclear bomb tests since the beginning of last year and by Pyongyang's vow to develop a nuclear-armed intercontinental ballistic missile (ICBM) capable of hitting the U.S. mainland.

U.S. officials and diplomats say that in spite of Trump's overtures to Beijing, China still appears reluctant to agree to tougher sanctions unless North Korea escalates tensions further by conducting another nuclear test or a launch directly related to its ICBM program.

They note that Mattis's first international trip was to the region, visiting Seoul and Tokyo. Vice President Mike Pence and Secretary of State Rex Tillerson also traveled to Asia and the latter hosted counterparts from the Association of Southeast Asian nations (ASEAN) this month. Trump himself is due to attend regional summits in Vietnam and the Philippines in November.

The Pentagon also says it supports "in principle" a proposal by Senator John McCain, the head of the Senate's Armed Services Committee, to increase military funding for the Asia-Pacific by $7.5 billion.

China played down the significance of the U.S. Navy's "freedom of navigation" operation last week. The Global Times, an influential tabloid published by China's official People's Daily newspaper, hailed Trump as a "pragmatist" following the "empty legacy" left by predecessor Barack Obama's pivot toward the region.

Asian officials say lingering worries about Trump's direction have been fueled by his unpredictable personal approach to policymaking and his emphasis on his chemistry with Xi.However even if Pyongyang is one day successful in developing threatening ballistic missiles in numbers, the U.S. is already breaking ground on the development of anti-ICBM technology.

The U.S. military said Tuesday it had intercepted a mock-up of an intercontinental ballistic missile in a first-of-its-kind test that comes amid concerns over North Korea's weapons program.

A ground-based interceptor launched from Vandenberg Air Force Base in California "successfully intercepted an intercontinental ballistic missile target" fired from the Reagan Test Site in the Marshall Islands, over 8,000 kilometers away, the military said in a statement.

The test saw a rocket from the Ground-based Midcourse Defense (GMD) system blast into space and then deploy its "exo-atmospheric kill vehicle," which smashed into the dummy ICBM, destroying it in a direct collision.

"This system is vitally important to the defense of our homeland, and this test demonstrates that we have a capable, credible deterrent against a very real threat," Vice Admiral Jim Syring, director of the US Missile Defense Agency, was quoted as saying.

The exercise marked a significant step for the GMD system, which has had a checkered record in previous tests. It came a day after North Korea test-fired yet another ballistic missile.

Pentagon spokesman Navy Captain Jeff Davis said Tuesday's trial was not timed specifically in response to tensions with Pyongyang but that "in a broad sense, North Korea is one of the reasons why we have this capability."

"They continue to conduct test launches, as we saw this weekend, while also using dangerous rhetoric that suggests they would strike the United States homeland," Davis said.

The technology behind the GMD is extremely complex, and the system uses globally deployed sensors to detect and track ballistic missile threats.

The interception is a move that the Pentagon says is akin to hitting a bullet with another bullet - though at far higher speeds and altitudes.