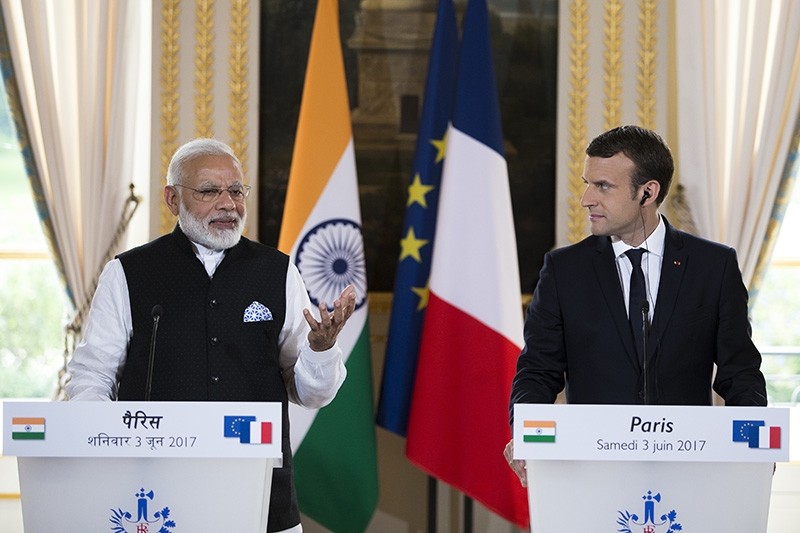 French President Emmanuel Macron, right, and Indian Prime Minister Narendra Modi, deliver a joint statement after their meeting at the Elysee Palace in Paris (AP Photo)
by Jun 03, 2017 12:00 am

Indian Prime Minister Narendra Modi vowed after meeting French President Emmanuel Macron Saturday to go "above and beyond" the Paris Agreement on climate change, after the U.S. said it would quit the deal.

Speaking two days after U.S. President Donald Trump announced plans to withdraw from the deal on curbing carbon emissions, Modi said it was "part of the world's shared heritage" and that India would "continue working...above and beyond the Paris accord".

The agreement signed by 195 countries in the French capital in 2015 "can protect future generations and give new hope," the Indian leader said.

He avoided direct criticism of Trump's move, however.

Macron said that during two hours of the talks that encompassed trade, defense and the anti-terror fight the pair had "mainly discussed our commitment to the climate".

"I want to restate here France's full commitment to the fight against climate warming," said the president, who reacted to Trump's announcement Thursday with a memorable call to "make the planet great again" -- a play on Trump's pledge to "make America great again" that has been shared by tens of thousands of Twitter users.

Macron said he would visit India, the world's third-largest carbon emitter, by the end of the year for an international summit on solar power -- an area on which France plans closer cooperation with the Asian power.

The Frenchman has led Europe's defense of the Paris accord in the face of Trump's climate skepticism.

As justification for his move Trump accused China and India of benefiting from the deal at the expense of the U.S.

On Friday, the Indian government said it was committed to the Paris climate accord irrespective of the position of other nations.

"As far as the Paris accord is concerned... our government is committed irrespective of the stand of anyone, anywhere in the world," Environment Minister Harsh Vardhan told reporters.