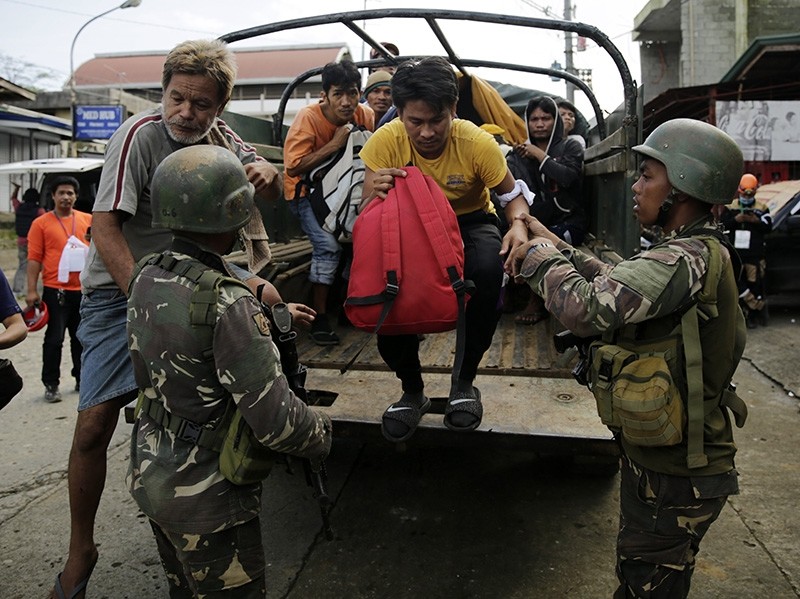 Filipino villagers who were trapped in the fighting between Daesh terrorists and government forces, are escorted by soldiers following their escape to freedom in Marawi City, June 03, 2017 (EPA Photo)
by reuters Jun 03, 2017 12:00 am

More than 160 civilians walked out of the besieged Philippines city of Marawi just after dawn on Saturday, deceiving Daesh terrorists they encountered by hiding the identity of the many Christians among them.

The audacious exodus came after text message warnings that a major assault by Philippines aircraft and ground troops was imminent in the center of the southern city, where some 250 militants and more than 2,000 civilians remain trapped.

"We saved ourselves," said Norodin Alonto Lucman, a well-known former politician and traditional clan leader who sheltered 71 people, including more than 50 Christians, in his home during the battle that erupted on May 23 in the town of more than 200,000 on the southern island of Mindanao. "There's this plan to bomb the whole city if ISIS don't agree to the demands of the government," he said, referring to local and foreign fighters who have sworn allegiance to the Daesh terrorist group.

Many evacuees told Reuters they had received text messages warning of a bombing campaign.

"We had a tip from the general commander that we should go out," said Leny Paccon, who gave refuge to 54 people in her home, including 44 Christians. "When I got the text, immediately we go out ... about 7 o'clock."

By then, Lucman and his guests had begun their escape march from another area, holding white flags and moving briskly.

"As we walked, others joined us," he told reporters. "We had to pass through a lot of snipers."

Some of the civilians were stopped and asked if there were any Christians among them, said Jaime Daligdig, a Christian construction worker.

"We shouted 'Allahu akbar'," he told Reuters, adding that thanks to that Muslim rallying cry they were allowed to pass.

Those who fled included teachers from Dansalan College, a protestant school torched on the first day of the battle.

Christians have been killed and taken hostage by the terrorists, a mix of local fighters from the Maute Group and others, as well as foreigners who joined the cause under the Daesh banner.