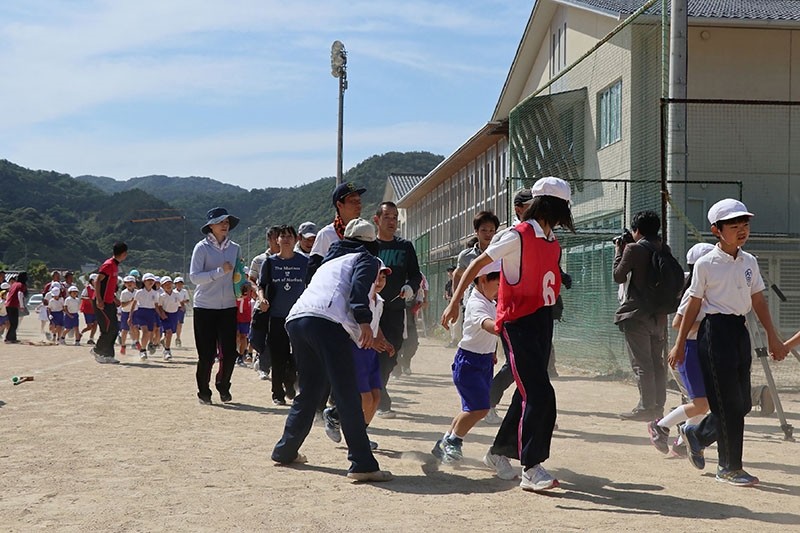 Schoolchildren are led by teachers toward a gymnasium during an evacuation drill at the Abu elementary school in Abu town, Yamaguchi prefecture. (AFP Photo)
by Jun 04, 2017 12:00 am

Hundreds of residents of a small Japanese coastal town took part in an evacuation drill Sunday as fears grow that a North Korean missile could hit the country.

The drill in the town of Abu, about 800 kilometres (500 miles) west of Tokyo facing the Sea of Japan, simulated a ballistic missile attack in the surrounding mountains in Yamaguchi prefecture which hosts a major US Marine Corps air station, a disaster agency official said.

It came less than a week after the nuclear-armed North test-fired a short-range projectile which fell provocatively close to Japan, its 12th ballistic missile test this year -- in defiance of UN sanctions warnings and US threats of possible military action.

TV footage from Abu showed young children holding hands as they ran to a school gymnasium doubling as an evacuation centre after a siren began blaring early Sunday.

"I was able to stay calm and evacuated in a few minutes," 67-year-old Yuriko Suewaka, who was among the 280 people involved in the exercise, told Jiji Press.

The drill, organised by central and local authorities, followed a similar exercise in March in the northern prefecture of Akita.

There are plans to conduct drills later this month in Yamagata and Niigata, north of Tokyo, both of which face the Sea of Japan, the official said.

"The government has requested local communities to prepare for the holding of an evacuation drill," he told AFP on condition of anonymity.

The southwestern city of Onojo in Fukuoka prefecture also held a drill on Sunday, independently from the central government, the official added.

Japan has been on edge over North Korean launches since a mid-range ballistic missile flew without warning over the northern part of the country and into the western Pacific in 1998.

The pace of the North's missile development has intensified and its projectiles have since last year been landing ever closer to Japan's coast.