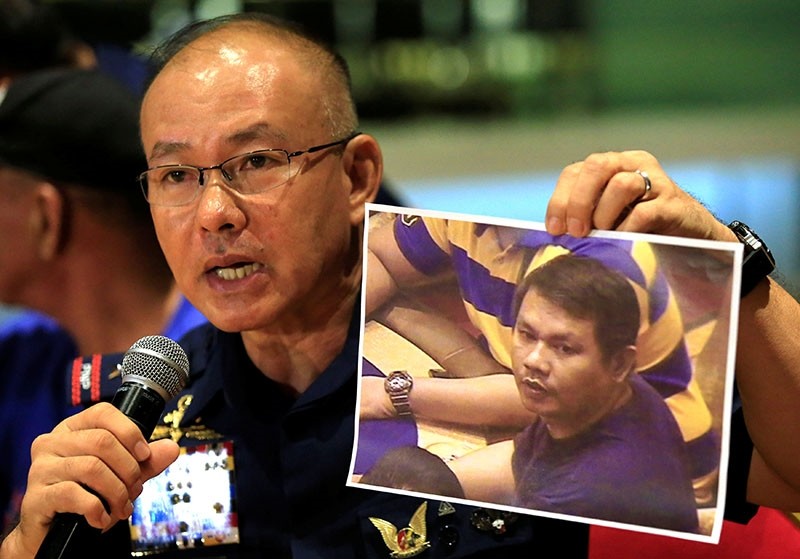 Oscar Albayalde, a chief of the capital's police office, shows to journalists a picture of a gunman Jessie Javier Carlos, a 42-year-old Filipino, who was behind an attack on a Resorts World casino on Friday. (Reuters Photo)
by Associated Press
Jun 04, 2017 12:00 am

The lone suspect behind a deadly attack on a casino and shopping complex in Manila was a heavily indebted Filipino gambling addict, police said Sunday, bolstering their claim the assault was not terrorism-related.

The man's immediate family confirmed his identity as Jessie Carlos — a married father of three and former Finance Department employee who owed more than $80,000 dollars.

The revelations confirm that "this is not an act of terrorism," Manila police chief Oscar Albayalde told a news conference. "This incident is confined to the act of one man alone as we have always said."

The Daesh terror group claimed responsibility for Friday's attack on Resorts World Manila, where 37 patrons and employees died, mostly from smoke inhalation as they tried to hide in one of the casino's VIP rooms on the second floor. But authorities have rejected the militants' claim, saying there is no evidence to back it and pointing out the assailant shot no civilians during the two-hour ordeal despite being heavily armed.

The Philippines has faced a terrorist insurgency in the country's south for decades, and Manila has been on edge since government forces began battling terrorists who besieged the southern city of Marawi.

On Sunday, Carlos' father told reporters his son had no connections to terrorism. His distraught mother, Teodora, wept and asked for forgiveness.

"We're asking for your apology. We can't accept ourselves that my son became like this, he was a very kind son," she said. "He chose to end his life rather than ... kill people."

"The message of what happened to my son is people should not get hooked on gambling so their families won't get destroyed," she said.

Carlos' wife was also brought before reporters. She was so distressed she entered in a wheelchair and kept her head, hidden by a cream-colored towel, down on a desk as she sat beside the police.

Albayalde said that Carlos had sold off property to support his gambling habit of at least several years, including a vehicle. His family had grown so concerned they had asked casinos in the capital to ban their husband since April 3.

The breakthrough in efforts to identify him came when investigators traced his path to the casino from a Manila suburb where he had hailed a taxi after midnight on Thursday. They found his wife there early Sunday.

She told them she had seen images of her husband on TV. "She knew it was him, but she was really afraid," Albayalde said.

In 2014, Philippine newspapers had reported that Carlos was fired from his job at the Finance Department "for grave misconduct and neglect of duty" because he failed to disclose that he owned a Manila house, a Toyota SUV and other business interests — an annual requirement for government officials and employees.

As a result, he was permanently banned from government employment and his retirement benefits were forfeited.

Authorities on Saturday released video footage of the attack to bolster their argument that it was a botched robbery attempt by one man with no known link to terrorism.

The security footage showed Carlos casually exiting a taxi just after midnight and walking calmly inside the entertainment complex. Shortly afterward, he dons a black ski mask, slips on an ammunition vest and pulls an M4 carbine assault rifle out of his backpack.

What followed borders on the surreal: a slow-motion arson attack and robbery so methodical and unhurried, the gunman appears to walk much of the way — even as he exchanges fire with a security guard and flees, slightly wounded, up a stairwell.

As thousands of people flee, the gunman is seen torching gambling tables and slot machines, setting fires police believe were meant as a diversionary tactic to allow his escape.

Then, just 11 minutes after his arrival, Carlos fires through the door of a storage room filled with poker chips, hauling a huge stash away.

He was later found dead on the fifth floor of a hotel connected to the complex, the 38th fatality of the night. Police said he shot himself and set fire to the empty room he had burst into.