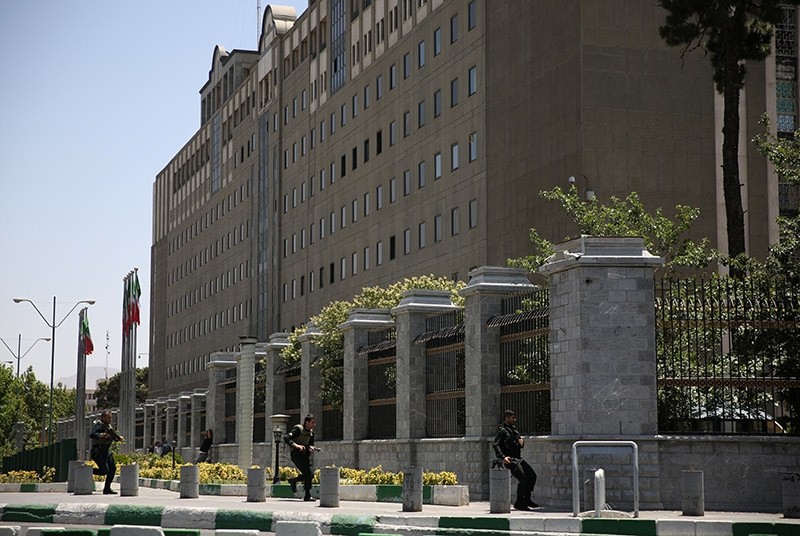 Members of Iranian forces run during a gunmen attack at the parliament's building in central Tehran, Iran, June 7, 2017. (Reuters Photo)
by Compiled from Wire Services Jun 07, 2017 12:00 am

A total of 39 people were wounded in the two attacks, and rescue operations are continuing, Emergency Services Chief Pir Hossein Kolivand said.

The Tasnim news agency reported that at least 12 people were killed in attack at the parliament, while four others were taken hostage.

State broadcaster IRIB reported later on Wednesday that the shooting incident at the Iranian parliament was over and all four assailants were dead.

"The security forces are checking for bombs and clearing the building," IRIB said.

One of the attackers blew himself up on the fourth floor of the parliament office building as the siege continued.

ISNA news agency quoted a member of the parliament as saying that all the parliament doors were shut and one of the assailants was surrounded by the security forces.

In the coordinated mid-morning attack, a gardener was reported dead and several more injured when armed assailants entered the grounds of Khomeini's mausoleum in the south of the city.

A female suicide bomber blew herself up outside the shrine, while another woman was arrested carrying six grenades, according to the Mizanonline news agency.

Parliament was in session as the attacks unfolded, with live footage showing members continuing with routine business even as gun battles were reported in surrounding office buildings.

Speaker Ali Larijani dismissed the attacks, saying they were a "trivial matter" and that security forces were dealing with them.

Intensified gunfire was heard from the neighboring offices as Fars news agency reported police had launched an assault.

Iran provides key ground forces against Daesh and other terrorist groups in Syria and Iraq.

The U.S. condemned the attacks in Tehran in a statement released by the State Department, saying "terrorism has no place in a peaceful, civilized world."