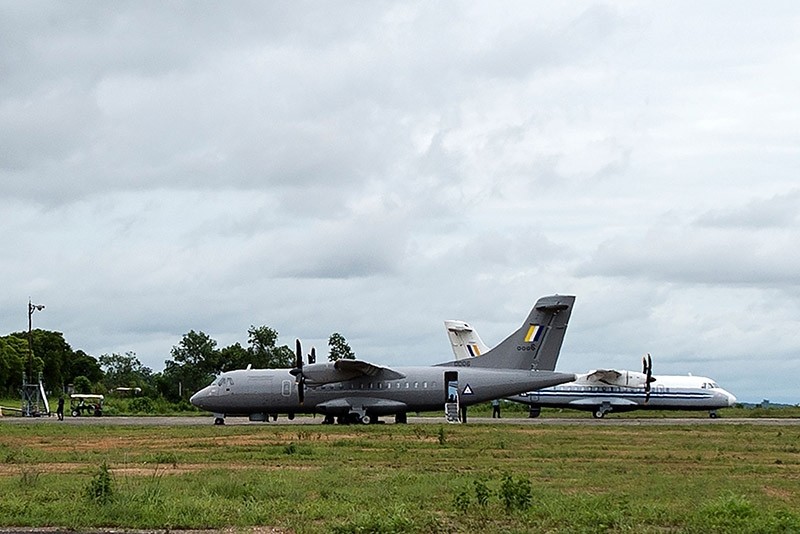 Myanmar search and rescue teams were pulling dead bodies from the sea off the country's southern coast Thursday after a military plane crashed with more than 120 people on board.

The commander-in-chief's office said 10 corpses, including five children and four women, had been retrieved so far from the Andaman Sea near where the plane went down on Wednesday in the waters off Launglon, near the town of Dawei.

A local police source, who asked not to be named, put the tally closer to 20, telling AFP: "Dead bodies are still being brought to the shores nearby."

Navy ships and air force planes have been scouring the waves since late Wednesday afternoon, when the Chinese-made plane disappeared on a routine flight from the southern city of Myeik to the commercial hub of Yangon.

On Thursday morning a navy search ship found the bodies of a man, woman and child, as well as luggage, safety jackets and a tyre presumed to be from the aircraft's wheel.

There was conflicting information on the number of people on board the Shaanxi Y8 plane when it disappeared, but in the latest update the military said it was carrying a total of 122 people.

More than half of the passengers were from military families, including 15 children, along with 35 soldiers and 14 crew members, the army chief's office said in a statement.

Some were travelling for medical check-ups or to attend school in Yangon.

Relatives of the passengers braced for the worst as rescue efforts continued.

Wai Lin Aung said his mother, who was in her 50s, had been flying back after visiting his sister, who is married to a soldier based in Myeik.

"The whole family is very sad and we are waiting for news," he told AFP, his voice full of worry after a sleepless night.

It is monsoon season in Myanmar, but there were no major storms reported along the aircraft's flight path on Wednesday afternoon.

Deputy director of the bureau of meteorology, Kyaw Moe Oo, said there was "no bad weather on that route" when it disappeared.

The military named the captain as "seasoned" pilot Lieutenant Colonel Nyein Chan, who it said had more than 3,000 hours of flying experience.

He was flying a Shaanxi Y8 four-engine turboprop, a popular Chinese-made medium-range transport aircraft based on the Soviet Antonov An-12, a widely used aircraft that has had numerous crashes over the decades.

Myanmar's former junta bought several during their 50 years of isolated rule, when they were squeezed by Western sanctions.

The military said the plane that crashed was delivered in March 2016 and had a total of 809 flying hours.

The debris was found in the Andaman Sea, north of the last known location of Malaysia Airlines flight 370.

That plane went missing in March 2014 en route from Kuala Lumpur to Beijing with 239 people on board, but no wreckage has ever been found.

A former executive at the aviation ministry said many of the aircraft were old and decrepit.

A five-strong crew died when an air force plane burst into flames soon after taking off from the capital Naypyidaw in February last year.

Three army officers were also killed in June when their Mi-2 helicopter crashed into a hillside and burst into flames in south-central Bago.