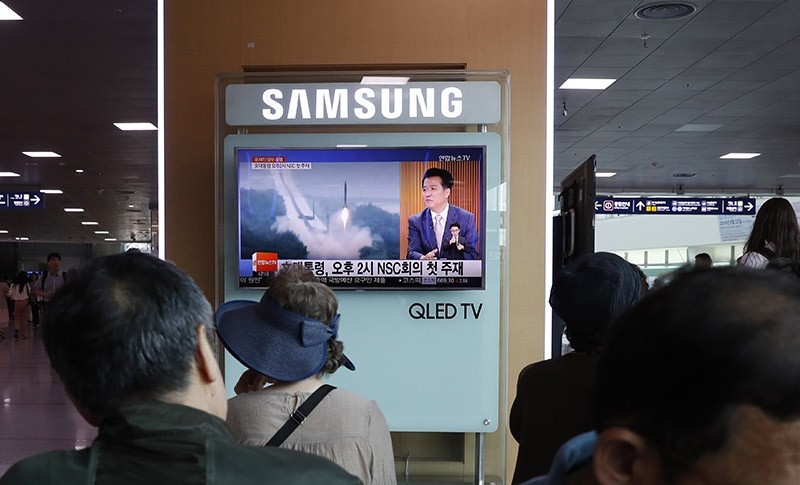 The projectiles were fired from the North Korean eastern coastal town of Wonsan and likely flew about 200 kilometers (about 125 miles) while reaching a maximum altitude of about 2 kilometers (1.2 miles), South Korea's Joint Chiefs of Staff said. They landed in waters between the Korean Peninsula and Japan, where U.S. aircraft carriers USS Carl Vinson and USS Ronald Reagan participated in joint exercises with the South Korean navy that ended earlier this week.

The North's missile tests present a difficult challenge to new South Korean President Moon Jae-in, a liberal elected last month who has expressed a desire to reach out to Pyongyang. North Korea, which could have a working nuclear-tipped intercontinental ballistic missile in the next several years, may also be the most urgent foreign policy concern for the Trump administration, which has been distracted by domestic political turmoil and has insisted China do more to rein in the North's weapons activities.

Roh Jae-cheon, spokesman of Seoul's military, said the latest launch would have intended to show off its widening arrange of missiles and also its "precision strike capabilities" on ships in response to the joint drills.

North Korea's weapons tests are meant to build a nuclear and missile program that can stand up to what it sees as U.S. and South Korean hostility, but they are also considered by outside analysts as ways to make its political demands clear to leaders in Washington and Seoul. Analysts say the latest test appeared to be aimed at keeping up pressures on Moon, who convened a National Security Council meeting in Seoul over the launch.

The launches Thursday were North Korea's fourth missile test in as many weeks as the country continues to speed up its development of nuclear weapons and missiles.

Japan's Foreign Minister Fumio Kishida said after Thursday's launch that Tokyo has not detected any "flying objects" that headed toward Japan or landed inside the country's maritime economic zone.

North Korea on May 14 premiered a powerful new midrange missile that it said could carry a heavy nuclear warhead. Experts said that rocket flew higher and for a longer time than any other missile previously tested by North Korea, and that it could one day reach targets as far away as Hawaii and Alaska.

The North in following weeks launched a solid-fuel midrange missile that can be fired on shorter notice than liquid fuel missiles, and also what it descried a new "precision-guided" missile, which experts say is designed with a maneuverable terminal stage meant to frustrate missile defense systems like the U.S. Terminal High Altitude Area Defense that is being deployed in South Korea.