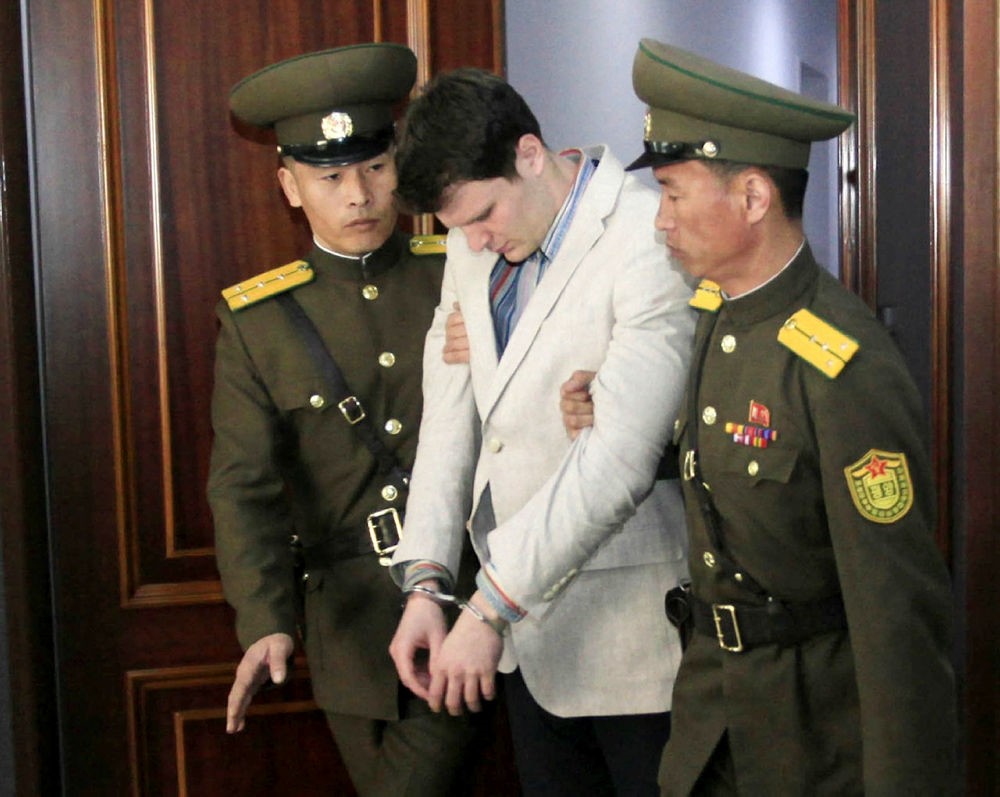 American student Otto Warmbier, center, is escorted at the Supreme Court in Pyongyang, North Korea. (AP Photo)
by Jun 15, 2017 12:00 am

The US student released by North Korea this week has damage to all parts of his brain, doctors said Thursday.

Otto Warmbier, 22, has been in "a state of unresponsive wakefulness" since arriving at an Ohio hospital after what North Korean officials said was more than a year in a coma, doctor Daniel Kanter said.

Warmbier has extensive loss of brain tissue, a condition that can often occur as a result of cardio-pulmonary arrest which cuts off the supply of blood to the brain for a period of time resulting in the death of brain tissue, Kanter said.

North Korean doctors had provided copies of brain scans dated to April 2016, consistent with the claim that he had been in a coma for more than a year. North Korea claimed it had released him on "humanitarian grounds," without providing specifics of the situation.

Warmbier can open his eyes and blink but has no signs of understanding language or responding to commands, Kanter said.

Doctors declined to speculate on what may have caused Warmbier's condition and said they would not discuss his prospects or treatment out of respect for his family.

Tests did not turn up evidence of botulism, which the North Koreans had claimed Warmbier contracted before being given a sleeping pill and not waking up, doctor Brandon Foreman said.

There was however no evidence of major fractures or soft tissue damage in the neck that could be evidence of other mistreatment.

"We have no certain info about what happened to Otto," Foreman said.

His father, Fred Warmbier, wearing the same jacket his son wore to a North Korean courtroom, told reporters his family does not believe the North Korean regime's account of how his son fell into a coma shortly after being sentenced at a show trial in March 2016.

"There is no reason for any civilized nation to keep his condition secret and deny him medical treatment for so long," Fred Warmbier said at a press conference in Cincinnati.

Warmbier was on a tour of North Korea early last year when he allegedly tried to steal a propaganda banner from his hotel and was charged with hostile acts against the state.

He was sentenced to 15 years in a labour camp after a one-hour trial in March 2016.

The elder Warmbier praised actions by President Donald Trump's administration to secure his son's release after the Obama administration had encouraged the family to take a low profile to avoid angering the North Korean regime.

"We relied on this false premise that they would treat Otto fairly and let him go," he said.