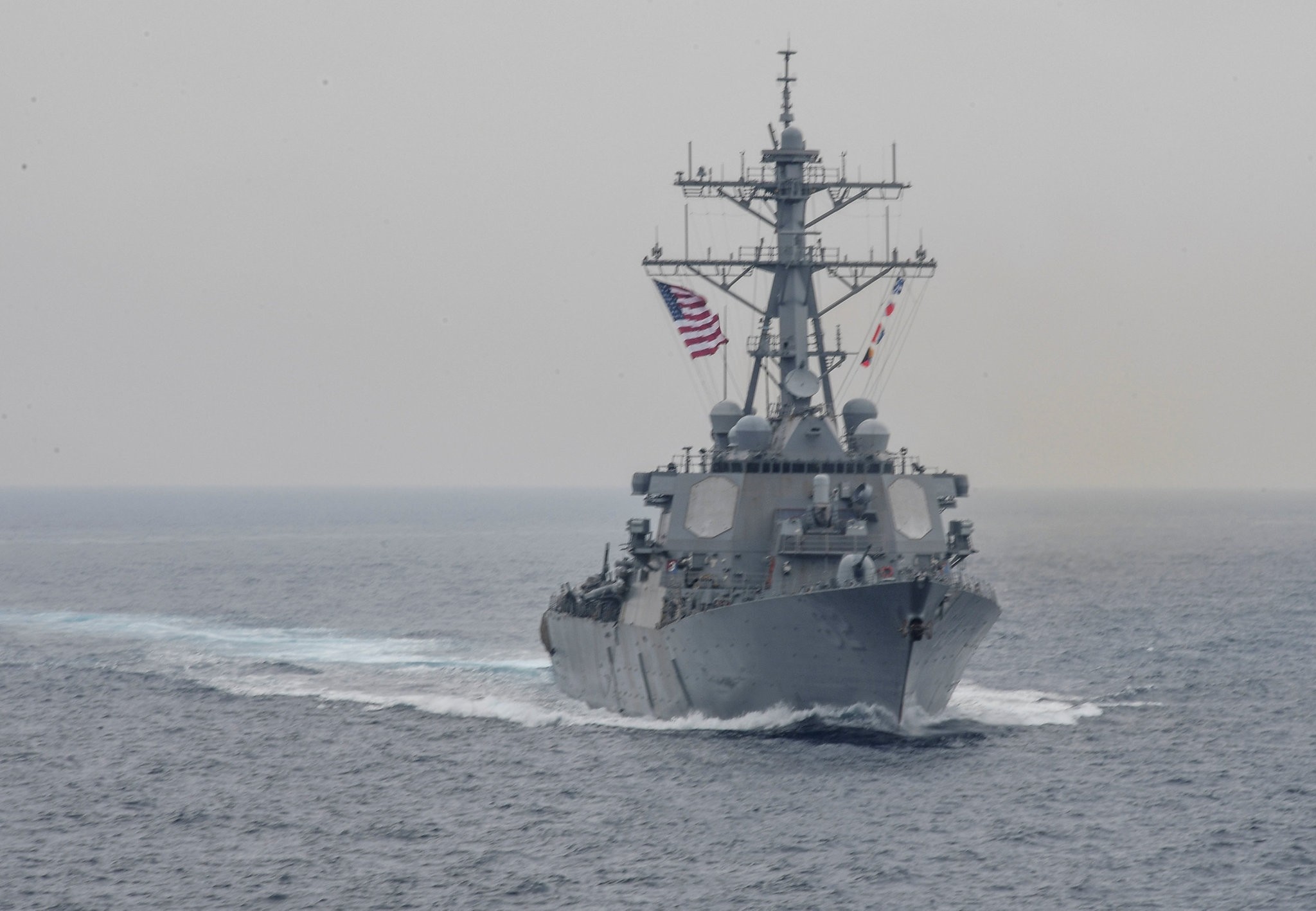 The Arleigh Burke-class guided-missile destroyer USS Fitzgerald sails in formation during a bilateral exercise between USS Carl Vinson and USS Ronald Reagan in this June 1, 2017 handout photo. (REUTERS Photo)
by Jun 16, 2017 12:00 am

Seven Navy sailors were missing and the captain and at least two others were injured after a U.S. destroyer and a container ship collided off the coast of Japan before dawn Saturday, the U.S. Navy and Japanese coast guard reported.

Rescuers were searching for the seven sailors who were thought to have been thrown into the sea or possibly trapped inside damaged sections of the destroyer, said Japanese coast guard spokesman Yoshihito Nakamura. None of the crew of the container ship was reported injured.

Footage from the Japanese TV network NHK showed Navy crew members working to pump water from flooded sections of the mid-right side of the USS Fitzgerald. The Navy's 7th Fleet said flooding was stabilized and sailors from the USS Dewey came aboard to assist in damage control.

The ship's captain, Cmdr. Bryce Benson, was airlifted to the U.S. Naval Hospital in Yokosuka and was in stable condition, the 7th Fleet said in a statement. Two other crew suffered cuts and bruises and were evacuated, it said. It was unclear how many others may have been hurt.

The Fitzgerald had limited propulsion after suffering damage on the right side below the water line and a U.S. defense official said there was flooding in three compartments. It wasn't clear yet what caused the nighttime collision between the destroyer and the container ship four times its size. Most of the more than 200 sailors aboard would have been asleep in their berths, some of which were reportedly flooded.

The area is particularly busy with sea traffic, said Yutaka Saito of the coast guard.

The Navy, Japanese maritime defense vessels and the coast guard were working to stabilize the destroyer as it headed to shore, said Navy chief Adm. John Richardson. The Navy said that the collision occurred 56 nautical miles (103 kilometers) southwest of Yokosuka, which is home to the 7th Fleet.

"Right now we are focused on two things: the safety of the ship and the well-being of the sailors," said Adm. Scott Swift, commander of the U.S. Pacific Fleet.

The Japan coast guard said it received an emergency call from a Philippine-registered container ship ACX Crystal around 2:20 a.m. (1720 GMT Friday) that it had collided with the Fitzgerald southwest of Yokusuka, Japan.

Relatives of crew members were awaiting news of their loved ones.

"Just heard the sweetest voice and saw a wonderful face. He's okay. Thank you all for the prayers," Rita Schrimsher of Athens, Alabama, tweeted after speaking with her 23-year-old grandson Jackson Schrimsher via Facetime.

"It could have been worse so we're grateful," she said by phone.

The Philippine ship is 29,060 tons and is 222 meters (730 feet) long, the coast guard said, much larger than the 8,315-ton naval destroyer. Aerial television news footage showed its bow on the left side was dented and scraped, but it did not appear to have suffered any major structural damage.

The fleet said the USS Dewey, medical assistance, Navy tugs and naval aircraft were dispatched. The Japan coast guard dispatched five patrol ships and an aircraft carrying medics to the site for search and rescue operations.

The Navy's Pacific Fleet said the extent of damage to the Fitzgerald was being determined and the incident was under investigation.