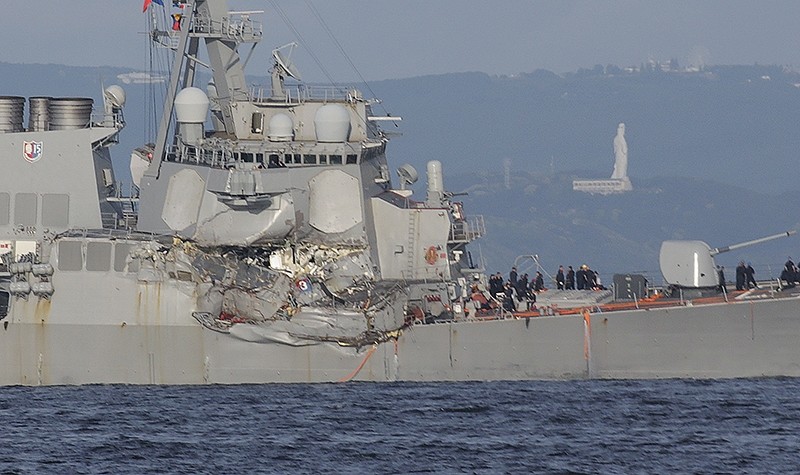 The damaged USS Fitzgerald is seen near the U.S. Naval base in Yokosuka, southwest of Tokyo, after the U.S. destroyer collided with the Philippine-registered container ship ACX Crystal in Japanese waters. (AP Photo)
by Jun 17, 2017 12:00 am

Rescue crews searched into the early hours on Sunday for seven American sailors missing after a U.S. destroyer collided with a container ship in the pre-dawn hours off the coast of Japan.

"It's been a tough day for our Navy family. It's hard to imagine what this crew has had to endure, the challenges they've had to overcome," Aucoin said.

U.S. and Japanese aircraft and surface vessels continued the search after the Fitzgerald sailed into the port of Yokosuka south of Tokyo. Three aboard the destroyer were treated at the U.S. Naval Hospital, including ship Commander Bryce Benson.

"Thoughts and prayers with the sailors of USS Fitzgerald and their families. Thank you to our Japanese allies for their assistance," U.S. President Donald Trump said in a Twitter post on Saturday.

The Fitzgerald suffered damage on her starboard side above and below the waterline, the Navy said.

Japan's Nippon Yusen KK, which charters the container ship, ASX Crystal, said in a statement it would "cooperate fully" with the Coast Guard's investigation of the incident. At around 29,000 tons displacement, the ship dwarfs the 8,315-ton U.S. warship, and was carrying 1,080 containers from the port of Nagoya to Tokyo.

None of the 20 crew members aboard the container ship, all Filipino, were injured, and the ship was not leaking oil, Nippon Yusen said. The ship arrived at Tokyo Bay later in the day.

The waterways approaching Tokyo Bay are busy with commercial vessels sailing to and from Japan's two biggest container ports in Tokyo and Yokohama.