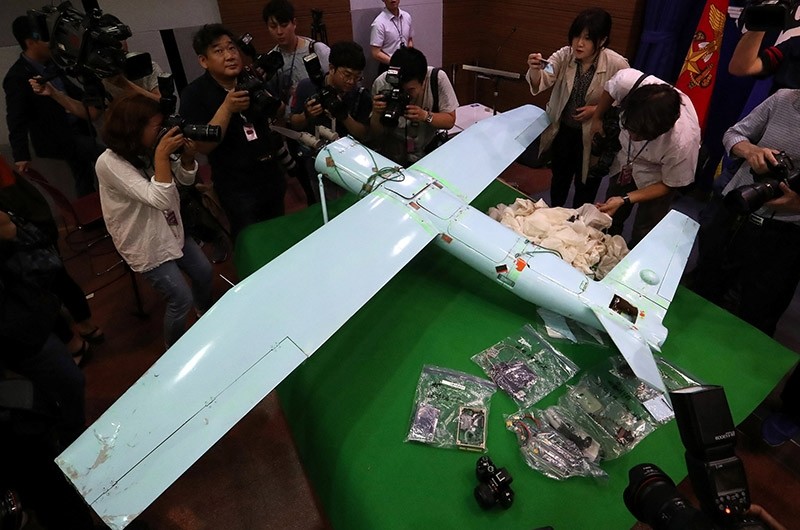 A small aircraft, which South Korea's Military says is a drone from North Korea, is seen at the Defense Ministry in Seoul, South Korea, June 21, 2017. (Reuters Photo)
by Compiled from Wire Services Jun 21, 2017 12:00 am

South Korea's military said on Wednesday a drone found earlier this month on a mountain near the Demilitarized Zone border was confirmed to have been from North Korea and described it as a "grave provocation" that violated the Korean War truce.

The drone crashed while returning to the North and was found equipped with a camera and aerial photographs of a U.S. anti-missile defense system site in a southern region of South Korea, South Korean officials told a briefing.

The origin and flight path of the drone were confirmed in an analysis of the onboard computer and camera, South Korea's defense ministry and military officials told the briefing.

"The intrusion of our airspace by the North Korean drone and photographing of a military base is a violation of the Armistice and an agreement on non-aggression and is an act of grave provocation," Jeon Dong-jin, an official of the Joint Chiefs of Staff office said.

"We strongly condemn the North's continued attempts at penetrating the South with drones and once again, demand all acts of provocation are halted," he said during the briefing.

"If North Korea continues to engage in acts of provocation against the South, our military will forcefully retaliate and we warn all responsibility for events occurring going forth is with the North."

The drone had been launched in the Kumgang-gun area in Kangwon Province on May 2, the defense ministry's spokesman Moon Sang-gyun told the briefing.

"The aircraft proceeded to fly for a total of five hours and thirty minutes and its assessed flight path matched the evidence seen in the photographs taken by it," said Moon.

Moon added the drone had been found with roughly 550 photographs and the military assessed it aimed to collect information on South Korean military bases and the anti-missile Terminal High Altitude Area Defense (THAAD) system located 217 km (135 miles) south of Seoul.

The South has requested an investigation by the UN Command which is in charge of supervising the armistice, which ended open conflict between the two sides, but has never been replaced with a final peace treaty.

Seoul's military said it was beefing up the country's defense against potential spying activities -- or even future attacks -- by North Korean drones, adding more border surveillance radars and anti-aircraft guns to shoot down drones.

Photos retrieved from the latest drone include several overviews of the site for the THAAD)system in the southeastern county of Seongju, according to the military.

The powerful US anti-missile system was installed this year to guard against growing missile threats from the nuclear-armed North.

South Korea in recent years has repeatedly accused the North of flying suspected spy drones across the tense border bisecting the peninsula.

In 2014, crashed drones equipped with cameras containing images of South Korean military facilities were found at the border region. The South's military blamed the North for the incursions.

A year later, South Korea triggered an anti-aircraft warning and sent an attack helicopter and fighter jet to track down a drone that crossed the border.

In January last year, South Korean soldiers fired warning shots at a suspected North Korean drone that flew across the western part of the border.

South Korea's new President Moon Jae-In this month urged the military to establish a system to efficiently deal with the North's drones.