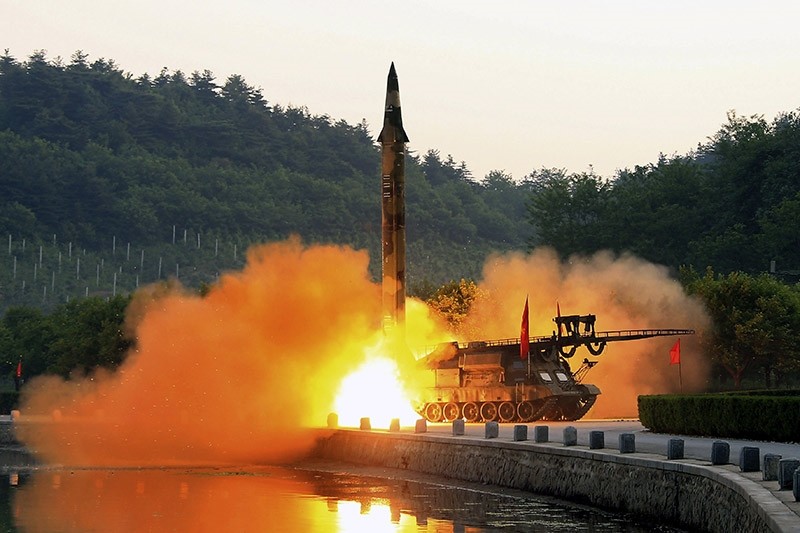 An undated photo made available by the KCNA, the state news agency of North Korea, shows the test-fire of a ballistic rocket equipped with precision guidance system, at an undisclosed location in North Korea. (EPA Photo)
by Compiled from Wire Services Jun 23, 2017 12:00 am

North Korea has tested a rocket engine that could potentially be fitted to an intercontinental ballistic missile, a U.S. official said on Thursday, amid soaring tensions over Kim Jong-Un's nuclear weapons program.

"A rocket engine was tested today," the U.S. official said on condition of anonymity, without providing any details.

A second U.S. official also confirmed the test but did not provide additional details on the type of rocket component that was being tested or whether it fit into the ICBM program.

One official said he believed the test had taken place within the past 24 hours.

News of the test came one day after U.S. Secretary of State Rex Tillerson urged China, Pyongyang's sole ally, to put more pressure on the North to rein in its atomic weapons and ballistic missile programs.

Calling North Korea the "top security threat" to the United States, Tillerson said China has a "diplomatic responsibility to exert much greater economic and diplomatic pressure on the regime if they want to prevent further escalation in the region."

"We watch North Korea's actions closely. But we will not comment on intelligence," Navy commander Gary Ross said in a emailed statement, declining to confirm the rocket engine test.

"We call on the DPRK to refrain from provocative, destabilizing actions and rhetoric, and to make the strategic choice to fulfill its international obligations and commitments and return to serious talks."

U.S. President Donald Trump has warned that a "major, major conflict" with North Korea is possible over its weapons programs, although U.S. officials say tougher sanctions, not military force, are the preferred option.

China's top diplomat, Yang Jiechi, told Trump in a meeting at the White House that Beijing was willing to "maintain communication and coordination" with the United States in an effort to diffuse tension on the Korean peninsula, according to a statement from China's Foreign Ministry on Friday.

The head of the U.S. Defense Intelligence Agency told Congress last month that North Korea, if left unchecked, was on an "inevitable" path to obtaining a nuclear-armed missile capable of striking the U.S. mainland.

Still, experts say Pyongyang could still be years away from have a reliable ICBM capability.

The United States, meanwhile, is ramping up capabilities to defend against the threat from North Korea, staging its first-ever successful test to intercept an incoming ICBM-type missile in May.

But a test on June 21 of a new capability being developed by the United States and Japan to defend against shorter-range missiles failed to hit its target, the U.S. Missile Defense Agency said on Thursday.

It was the second such test of the SM-3 Block IIA interceptor, which is being developed by Raytheon. The previous intercept test, conducted in February, had been successful.