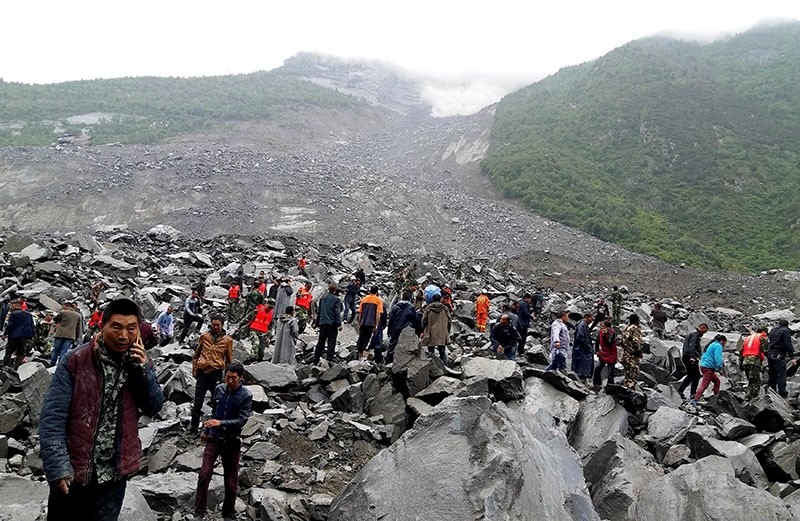 People search for survivors at the site of a landslide that destroyed some 40 households, where more than 140 people are feared to be buried. (AFP Photo)
by Jun 24, 2017 12:00 am

Chinese rescuers scoured through rocks on Saturday in a frantic search for more than 140 people feared buried after a landslide smashed through a mountain village in southwest Sichuan province.

A couple and a baby were rescued and taken to hospital after more than 40 homes in the village of Xinmo were swallowed by huge boulders when the side of a mountain collapsed, according to the Maoxian county government.

At least 141 people and 46 homes were buried, the People's Daily said, citing a Maoxian county government spokesman. The landslide blocked a two kilometer (one mile) stretch of river and 1.6 kilometer of road.

Rescuers used ropes to move a massive rock while dozens of others searched the rubble for survivors, according to videos posted by the Maoxian government on its Weibo social media account.

Bulldozers and heavy diggers were also deployed to remove boulders, the images showed. Medics were seen treating a woman on a road.

Wang Yongbo, one of the local officials in charge of rescue efforts, said the vital signs of one of the survivors "are weak".

"It's the biggest landslide in this area since the Wenchuan earthquake," he said, referring to the disaster that killed 87,000 people in 2008 in a town in Sichuan.

Local police captain Chen Tiebo said the heavy rains that hit the region in recent days had triggered the landslide.

"There are several tonnes of rock," he told the state broadcaster CCTV.

"It's a seismic area here. There's not a lot of vegetation," Chen said.

Some 500 people were taking part in rescue efforts, according to CCTV.

An emergency response "to the first class catastrophic geological disaster" is under way, the local government's statement said, adding that the full extent of the landslide was at yet unclear.

A report from the state news agency Xinhua said that the landslide came from a high part of a mountain in the Tibetan and Qiang Autonomous Prefecture of Aba had collapsed.

President Xi Jinping called for rescuers to "spare no effort" in their search for survivors, according to CCTV.

Landslides are a frequent danger in rural and mountainous parts of China, particularly at times of heavy rains.

At least 12 people were killed in January when a landslide crushed a hotel in central Hubei province.

More than 70 were killed by a landslide in the southern commercial hub of Shenzhen in December 2015, caused by the improper storage of waste.

One of the deadliest landslides took place in 1991, when 216 were killed in southwestern Yunnan province.