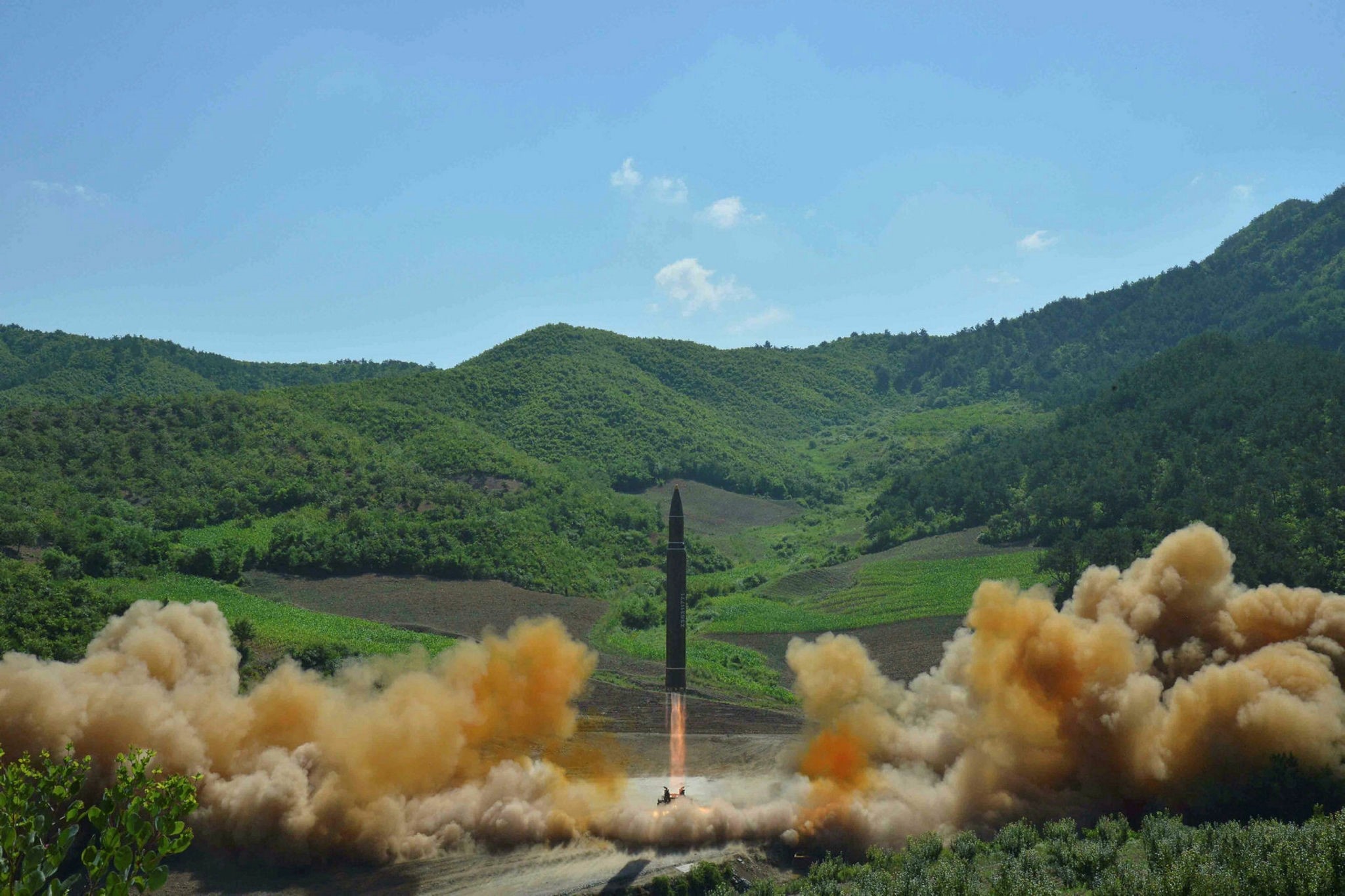 The intercontinental ballistic missile Hwasong-14 is seen during its test launch in this undated photo released by North Korea's Korean Central News Agency (KCNA) in Pyongyang, July, 4 2017. (Reuters Photo)
by Daily Sabah with Wires Jul 04, 2017 12:00 am

The tensions are high in the Korean Peninsula, with another "successful" missile launch claimed by Pyongyang.

In a statement, Tillerson warned that any country that hosts North Korea workers, or provides economic or military aid to Pyongyang, or failed to implement United Nations sanctions "is aiding and abetting a dangerous regime."

"All nations should publicly demonstrate to North Korea that there are consequences to their pursuit of nuclear weapons," Tillerson said.

Tillerson also condemned North Korea's launch of the ICBM, saying the testing of the missile represents a "new escalation" of the threat to the US, its allies and partners, the region, and the world.

The US military confirmed earlier on the same day that it "detected and tracked" a North Korean missile, while China and Russia said they stood behind a collaborative effort to stop Pyongyang's nuclear weapons programme.

The missile was tracked for 37 minutes before it landed in the Sea of Japan, US Pacific Command said in a statement.

It was launched from near Panghyon Airfield at 12:40 am Tuesday (0040 GMT) and did not pose a threat to North America, the statement said, providing details about the launch, which had been announced by North Korea and detected by South Korea's military.

In claiming that it successfully tested its first intercontinental ballistic missile (ICBM), North Korea said the Hwasong-14 missile had reached a cruising altitude of 2,802 kilometres and had flown 933 kilometres before landing in the Sea of Japan.

But the US Pacific Command statement refuted that it was an ICBM, saying it was "a land-based, intermediate-range ballistic missile."

Russia's Defence Ministry also said it had monitored the flight of the missile and concluded it was a "medium-range" ballistic missile.

The launch came days before a summit of G20 leaders in Hamburg, Germany, and a day after US President Donald Trump called Chinese President Xi Jinping and Japanese Prime Minister Shinzo Abe to discuss the nuclear threat from Pyongyang.

Trump, who has turned to Beijing for help in reining in North Korea, sent a series of tweets after the launch, apparently ridiculing North Korean Supreme Leader Kim Jong Un and urging China to do more.

"North Korea has just launched another missile. Does this guy have anything better to do with his life?" he wrote.

"Hard to believe that South Korea and Japan will put up with this much longer. Perhaps China will put a heavy move on North Korea and end this nonsense once and for all!"

Russian President Vladimir Putin and China's Xi, who was on a two-day visit to Moscow, agreed to actively promote a collaborative initiative to "freeze the nuclear activities of North Korea and the large-scale military exercises of the US and South Korea," Putin said.

"Our mutual priorities include a comprehensive resolution of the problems of the Korean Peninsula in order to ensure lasting peace and stability in north-eastern Asia," Putin said, according to state news agency TASS.

Russia and China have the closest diplomatic relations with the hermit kingdom.

Earlier in the day, Chinese Foreign Ministry spokesman Geng Shuang called for "peaceful dialogue and consultation" as the only way to deal with the situation on the Korean Peninsula.

"China has made efforts and will continue to make efforts to solve this issue," he said, adding that China hopes all sides will show self-restraint and avoid taking actions that will escalate the situation.

Abe said the launch showed "increasing threats" from North Korea and that he would urge Xi and Putin to play a "more constructive" role in dealing with Pyongyang at the G20.

North Korea has ramped up its nuclear programme over the past year and has staged six missile launches since South Korean President Moon Jae In took office on May 10.

China's UN Ambassador Liu Jieyi said that Beijing would push for the US and South Korea to halt military exercises on the Korean Peninsula in exchange for North Korea suspending its nuclear and ballistic missile programmes.

Trump has repeatedly warned that the "era of strategic patience" with Pyongyang is over and last week called for a "determined response" at a meeting with Moon in Washington.

Trump, Abe and Moon are expected to discuss North Korea on the sidelines of this week's G20 summit, while Trump is expected to hold talks separately with Xi.