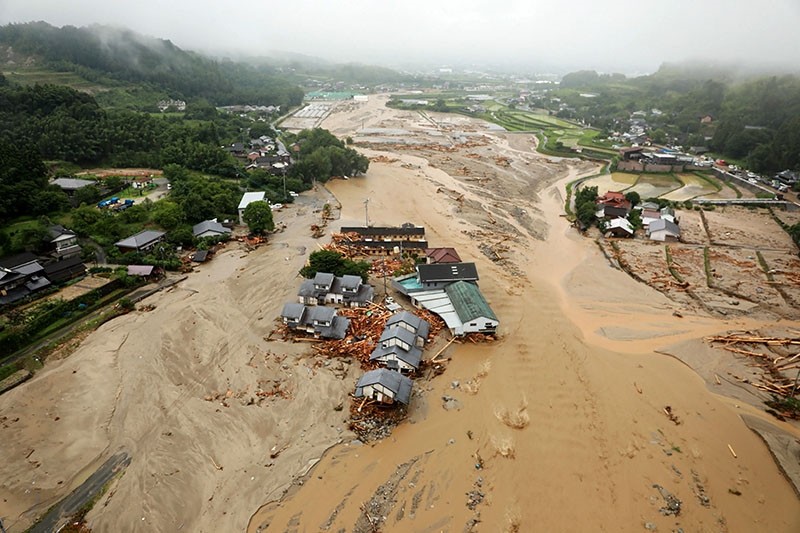 At least two people have been killed and about 20 others are missing in huge floods that are surging through southern Japan, with hundreds of thousands of people ordered or urged to flee.

Unprecedented torrential rain has caused rivers to burst their banks, sweeping away roads and houses, and destroying schools.

Thousands of soldiers and others were scrambling Thursday to reach people cut off by torrents of swirling water or threatened by landslides, and had rescued 250 people, the government said.

"We are in an extremely serious situation," Deputy Prime Minister Taro Aso said, warning of the danger of collapsing hillsides and adding "many people are still missing".

More than 50 centimeters (20 inches) of rain deluged parts of Kyushu, the southernmost of Japan's four main islands, over 12 hours on Wednesday, the meteorological agency said.

Downpours will likely continue through Friday, the agency said as the region grapples with the aftermath of a typhoon that raked the country this week.

Authorities lifted "special" heavy rain warnings for the hardest hit prefectures of Fukuoka and Oita, although other warnings, such as for rain, landslides and flooding, remained in place.

One man was found dead in the city of Asakura in Fukuoka prefecture, while another died in a landslide in Hita in Oita prefecture, officials said.

Japan is deploying 7,800 police, rescue personnel and troops in affected areas of Kyushu, Chief Cabinet Secretary Yoshihide Suga said, telling reporters that "there are about 20 people who are unaccounted for".

Those included a child reportedly carried off by a fast-flowing river and a couple who had not been seen since their house was swept away.

Nearly 600,000 people were ordered or advised to evacuate in Fukuoka, but only a fraction of them did, in part because the heavy rain worsened during the night. Only about 1,800 people had sought refuge in schools and other public facilities as of early Thursday, according to the prefecture's disaster management website. In Oita, more than 270,000 people were subject for evacuation.

Asakura was among the hardest hit with footage showing floodwaters surging through the streets.

Ryoichi Nishioka, who grows flowers in the city, said he tried to save them from damage amid fast rising waters the night before.

"I tried to protect them by covering them up but couldn't make it," he told AFP. "Then the swirling water flooded this area and swept away the greenhouses."

Nishioka, 67, also described helping a man who clung to an electric pole as muddy waters rampaged through the area on Wednesday night.

"We had a blackout, so I used a flashlight from the second floor and shined light for him," he said. "I was calling out to encourage him for three hours from 9pm to midnight.

"I shouted: 'Hang in there!'" The man was ultimately rescued, Nishioka said.

An elderly man in the hard-hit Haki district of Asakura told NHK how furniture bobbed in the flood waters that inundated his home.

"I dodged them and escaped in a gush of water," he said.

A railroad bridge has been destroyed by the raging Kagetsu river, disrupting train services, a railway spokesman said.

Several other train lines were also forced to delay or stop operations due to heavy rains, while local officials called off classes at primary and middle schools.