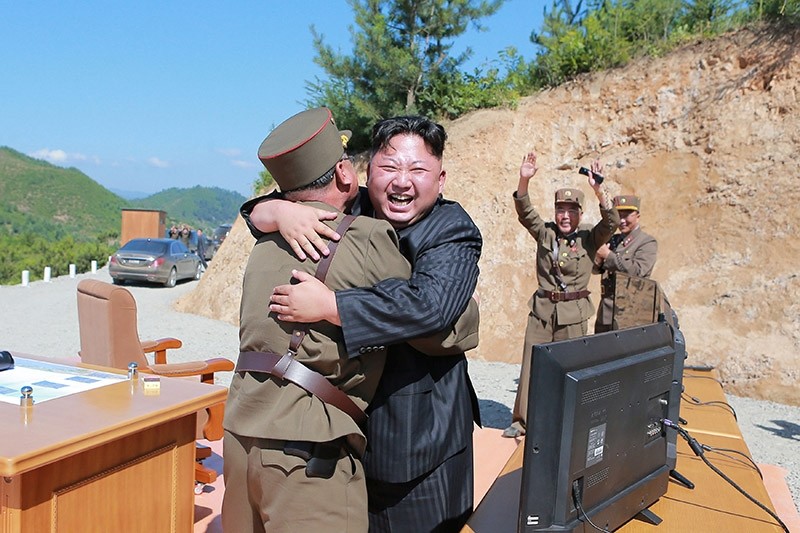 North Korean leader Kim Jong Un reacts with scientists and technicians of the DPRK Academy of Defense Science after the test-launch of the intercontinental ballistic missile Hwasong-14 in Pyongyang July, 5, 2017. (Reuters Photo)
by Associated Press Jul 11, 2017 12:00 am

Among the numbers performed were "Song of Hwasong Rocket" and "Make Others Envy Us," the North's official Korean Central News Agency reported.

Leading the bill at the concert was the Moranbong Band, an all-female ensemble that was hand-picked by Kim and serves as something of the "soft" face of his regime.

Pyongyang has been the scene of a slew of special events to mark the July 4 launch of Hwasong-14, which is believed to be capable of reaching most of Alaska and possibly farther.

The launch is being treated as a major national milestone in North Korea, with the government and media touting it as a technological breakthrough few other nations have achieved.

The concert, which took place on Sunday before a packed crowd, many in uniform, also featured dancing.

Clips of the concert shown on North Korean television on Monday showed the crowd repeatedly cheering and applauding for Kim.

Along with the Moranbong Band, the concert had North Korea's other top headliners — a similar pop ensemble called the Chongbong Band, the uniformed State Merited Chorus and the Wangjaesan Art Troupe.