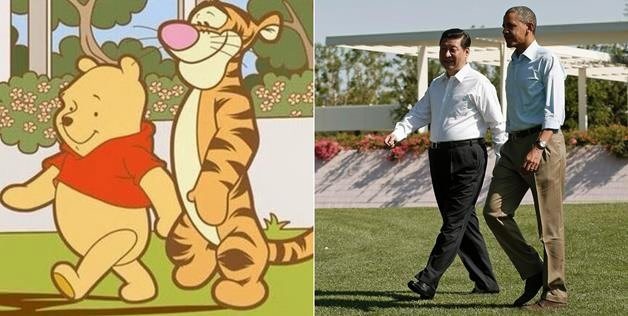 Some images and mentions of popular cartoon character Winnie the Pooh have been blocked on Chinese social networks Sunday.

Authorities did not explain the clampdown, but the self-described "bear of very little brain" has been used in the past in a meme comparing him to portly Chinese President Xi Jinping.

Posts bearing the image and the Chinese characters for Winnie the Pooh were still permitted on the Twitter-like Weibo platform Monday.

But comments referencing "Little Bear Winnie," Pooh's Chinese name, turned up error messages saying the user could not proceed because "this content is illegal."

Winnie the Pooh stickers have also been removed from WeChat's official "sticker gallery," but user-generated gifs of the bear are still available on the popular messaging app.

Comparisons between Xi and Pooh first emerged in 2013, after Chinese social media users began circulating a pair of pictures that placed an image of Pooh and his slender tiger friend "Tigger" beside a photograph of Xi walking with then-U.S. President Barack Obama.

In 2014, a photographed handshake between Xi and Japanese Prime Minister Shinzo Abe was matched with an image of Pooh gripping the hoof of his gloomy donkey friend Eeyore.

And in 2015, the political analysis portal Global Risk Insights called a picture of Xi standing up through the roof of a parade car paired with an image of a Winnie the Pooh toy car "China's most censored photo" of the year.

The ruling Communist Party is highly sensitive to comical depictions of its leader, particularly as Xi attempts to consolidate power ahead of a key party congress later this year.

On Monday many Chinese social media users were testing the boundaries of the restrictions imposed on the bear who groans "oh, bother" when things don't go his way.

"What did this adorable honey-loving bear ever do to provoke anyone?"