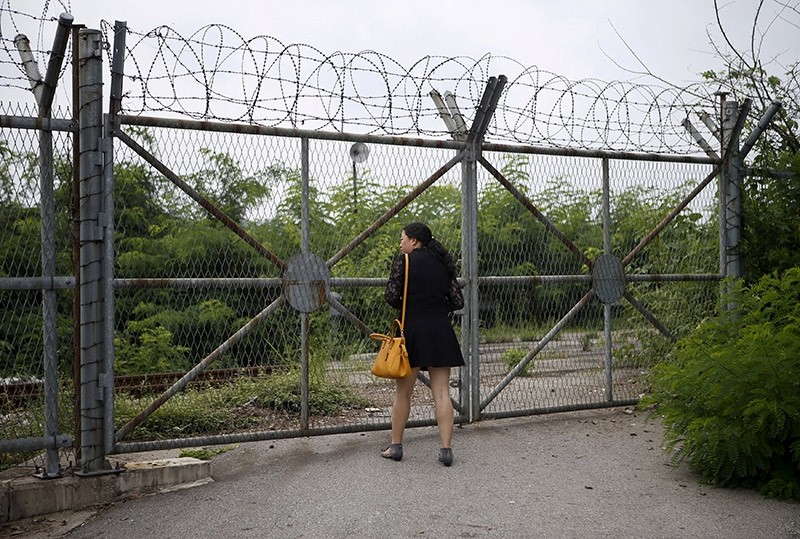 A Chinese tourist looks over a barbed-wire fence at the Imjingak pavilion near the demilitarized zone which separates the two Koreas, in Paju, South Korea, August 21, 2015. (Reuters Photo)
by Compiled from Wire Services Jul 17, 2017 12:00 am

South Korea offered Monday to talk with North Korea to ease animosities along their tense border and resume reunions of families separated by their war in the 1950s.

It's unclear if North Korea would agree to the proposed talks as it remains suspicious of the South Korean president's overtures, seeing the new leader's more liberal policy as still resorting to the United States to force North Korea to disarm.

Millions of families were separated by the conflict that sealed the division of the two countries. Many died without getting a chance to see or hear from their families on the other side of the heavily-fortified border, across which all civilian communication is banned.

With the passage of time, the number of survivors has diminished, with only around 60,000 members of divided families still left in the South.

"North Korea should respond to our sincere proposals if it really seeks peace on the Korean Peninsula", Cho Myoung-Gyon, Seoul's unification minister in charge of North Korea affairs, told reporters.

Cho stressed that Seoul "would not seek collapse of the North or unification through absorbing the North," and urged Pyongyang to restore inter-Korea communication channels including a shuttered military hotline.

Moon, who took power in May, has advocated dialogue with the nuclear-armed North as a means of bringing it to the negotiating table and vowed to play a more active role in global efforts to tame the South's unpredictable neighbor.

But Pyongyang has staged a series of missile launches in violation of UN resolutions, most recently on July 4 when it test-fired its first ICBM, a move which triggered global alarm and a push by President Donald Trump to impose harsher UN sanctions on the country.

Washington has also called on China, the North's sole ally, to put more pressure on Pyongyang to rein in its nuclear ambitions, which have advanced rapidly under the North's leader Kim Jong-Un.

The latest ICBM test -- which Kim described as a "gift" to the Americans -- was seen as a milestone in Pyongyang's quest to build a missile capable of carrying a nuclear warhead that can hit the US mainland.

The proposed meetings, if realized, would be a "rare opportunity to ease tension that has built up for 10 years", said Cheong Seong-Chang, analyst at Sejong Institute think tank.

"It would at least help let off some steam out of the current crisis, although the North would still maintain that it would not give up its weapons programs," he said.

The agenda for the meeting could include moves to suspend propaganda campaigns operated on both sides of the border for years, Cheong added.

The South's military has deployed dozens of giant loudspeakers along the tense border to blare out a mix of world news, K-pop songs and other propaganda targeting young North Korean soldiers.

It has also occasionally launched giant balloons containing anti-Pyongyang leaflets across the border despite warnings of military retaliation by the North.

The North has responded with its own propaganda broadcasts and sent anti-Seoul leaflets via giant balloons across the border.