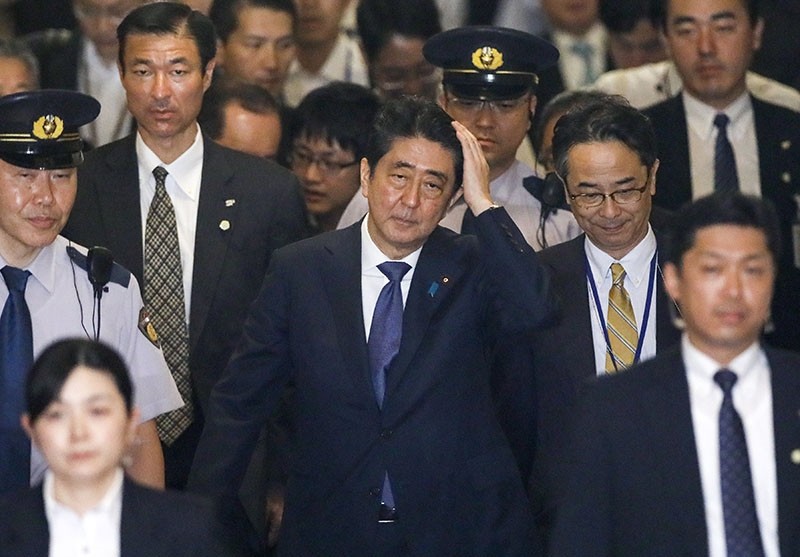 Grilled by opposition lawmakers as approval ratings for his Cabinet sink, Japanese Prime Minister Shinzo Abe on Monday repeated his denials that he misused his influence to help a friend in a growing favoritism scandal.

Abe is expected to reshuffle his Cabinet next week, after seeing public approval sink following various scandals and his party's railroading of unpopular legislation.

Monday's questioning was over allegations that Abe intervened to help a friend, Kotaro Kake, gain approval to open a veterinary school in western Japan.

During the session in the lower house of parliament, Abe said he only sought reforms for the sector in a special economic zone and did not directly get involved in the decision on Kake's application.

"I only instructed to speed up efforts for the deregulation reforms. I have never issued instructions on specific cases," Abe said. "The approval is a result of the process that was appropriate and open."

The school scandal erupted after a whistleblower and former top education ministry bureaucrat, Kihei Maekawa, came forward to say that Abe's office had had significant influence over the school's approval and distorted the decision. Scores of ministry documents showed the alleged pressure for an early approval of Kake's application came from the "top levels" of the Prime Minister's Office, said Maekawa.

He and other witnesses, including bureaucrats and two former members of the Abe-commissioned panel on the school, said they were not directly instructed by Abe.

Given the lack of significant center-left alternatives or strong rivals within his party, Abe's tenure as prime minister is not under immediate threat.

Still, Abe, in his second stint as prime minister, is getting the message that he might have to tread a bit more softly in pushing for some of his top political priorities, such as revising Japan's war-renouncing constitution.

Approval ratings for Abe's Cabinet, which had enjoyed stable popularity of around 50 percent until earlier this year, recently nosedived to just above 30 percent, and have hit new lows.

Results from Mainichi newspaper polls taken over the weekend show that support ratings for Abe's Cabinet stood at 26 percent, down 10 points from last month, with 56 percent disapproving of his government. Sixty-two percent of the respondents said Abe should step down when his term ends next year, while only 23 percent supported his extended leadership.

Abe is also under fire for not replacing his protege, Defense Minister Tomomi Inada, despite repeated scandals. The latest one involves an alleged cover-up of internal documents, including the daily activities and safety conditions of Japan's Self-Defense Force during its U.N. peacekeeping operations in South Sudan.

The losses in the polls are a major setback for Abe because much of his party support was for his record of election victories. Abe, who took office in late 2012, was seeking a third term when his term ends in 2018.

During the questioning Monday, Abe acknowledged that Kake, director of a major education organization, was a friend even before he became a lawmaker in 1993. But he said Kake has not tried to tap Abe's position or influence to obtain preferential treatment and did not discuss with him his plans to open a new veterinary school in Imabari, in western Japan.

Kake's desire to open such a school was not secret: The application had been repeatedly denied by past administrations for years.
Last Update: Jul 24, 2017 12:20 pm
RELATED TOPICS