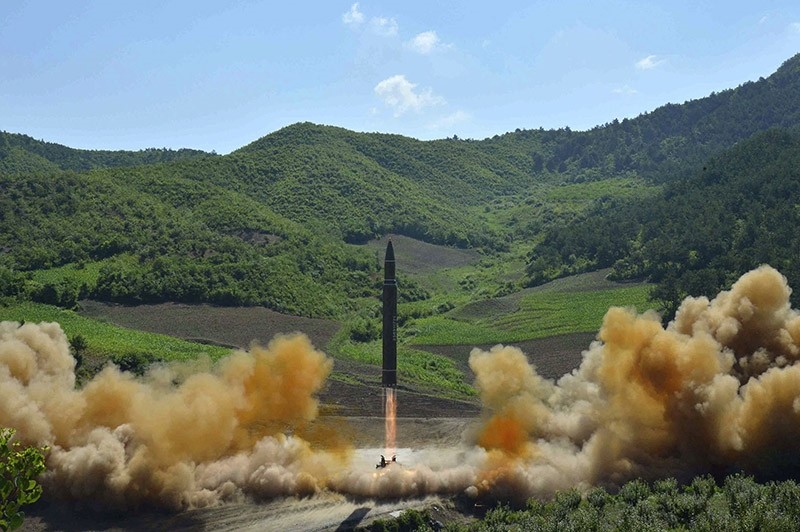 This July 4, 2017 file photo, distributed by the North Korean government shows what was said to be the launch of a Hwasong-14 intercontinental ballistic missile in North Korea. (AP Photo)
by Jul 25, 2017 12:00 am

Speculation intensified Tuesday that North Korea is preparing another missile launch to coincide with a military anniversary, just weeks after conducting its first successful test of an ICBM that experts warned could reach Alaska.

The test -- which both Seoul and Washington officials warned could be of another intercontinental ballistic missile (ICBM)-- could coincide with the 64th anniversary of the end of the Korean War on July 27, reports said.

This is a public holiday in the nuclear-armed North and celebrated as Victory Day.

The two Koreas have remained technically at war since the three-year conflict ended only with a ceasefire rather than a full peace treaty.

"There is a high possibility that the North may carry out (the test-launch) around the July 27 armistice day."

The North in 2014 marked the armistice anniversary by firing a Scud-B short-range missile on July 26.

Yonhap also cited a South Korean military source as saying Pyongyang may be preparing to test a new type of ICBM or an intermediate-range missile.

On Monday CNN cited a U.S. defense official as saying the North appeared to be preparing for another missile test. That official said transporter vehicles carrying launching equipment were seen arriving at Kusong in North Pyongan last Friday.

The U.S. network earlier cited U.S. intelligence as indicating preparations for another test of an ICBM or intermediate-range missile.

Kusong has been the scene of past tests, including in May when an intermediate-range ballistic missile traveled more than 700 kilometers (435 miles).

Pyongyang triggered global alarm on July 4, U.S. Independence Day, when it test-fired its first ICBM which experts believe can reach Alaska -- a landmark development in its weapons program.

North Korean leader Kim Jong-Un, who personally oversaw the launch, described it as gift to the "American bastards".

The ICBM brings within reach Pyongyang's long-held dream of a missile that can deliver an atomic warhead to the continental United States, and presents U.S. President Donald Trump with a stark challenge.

The North last week refused to respond to the South's offer to open dialogue to ease tension.

Yonhap also quoted a different Seoul government source as saying that an 1,800-ton North Korean submarine in the Sea of Japan (East Sea) may be collecting data to prepare for a ballistic missile test-launch from the North's largest submarine.