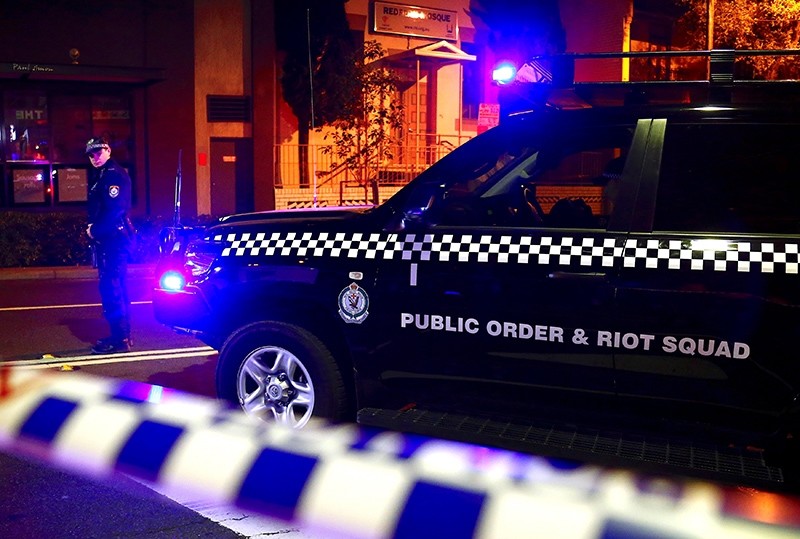 A policeman stands on a street that has been blocked to the public after Australian counter-terrorism police arrested four people in raids late on Saturday (Reuters Photo)
by Compiled from Wire Services
Jul 29, 2017 12:00 am

Australian Police carried out counter-terrorism raids in four suburbs of Sydney on Saturday over a suspected bomb plot to bring down an airliner, according to officials and local media.

Four men were taken into custody in what was described as a "major" operation by the New South Wales Joint Counter Terrorism Team.

"These searches and the broader investigation remain ongoing, and further information will be made available at the appropriate time," the police said in a statement.

Searches were conducted in the suburbs of Lakemba, Surry Hills, Wiley Park and Punchbowl.

The Sydney Morning Herald cited police sources saying the raids relate to a terrorist cell and a bomb plot to bring down an aircraft.

The raids were not planned but were a rapid response to information received by police, the newspaper reported.

Prime Minister Malcolm Turnbull said he had been "closely briefed" about the operation.

"These operations are designed to disrupt and prevent plans to undertake terrorist attacks in Australia," Turnbull said in a statement.

The Seven Network reported 40 riot squad officers moved on one inner city home before an explosives team found a suspicious device, although police would not confirm this.

TV footage showed a man with a bandage on his head and draped in a blanket being led away by authorities.

National broadcaster ABC quoted a woman as saying her son and husband were arrested in the raids, but denied they had links to terrorism.

"I love Australia," she said as she was led away to a car.

Australian officials have grown increasingly concerned about the threat of terrorist attacks and have prevented 12 on home soil since September 2014, with more than 60 people charged.

But five have taken place, mostly with guns, including a fatal shootout in Melbourne in June claimed by the Daesh terrorist group.

In that incident, a man of Somali background was killed in a gun battle with police when he opened fire following an hour-long standoff after taking a woman hostage.