Pakistani PM Sharif's ouster may be more complicated than corruption 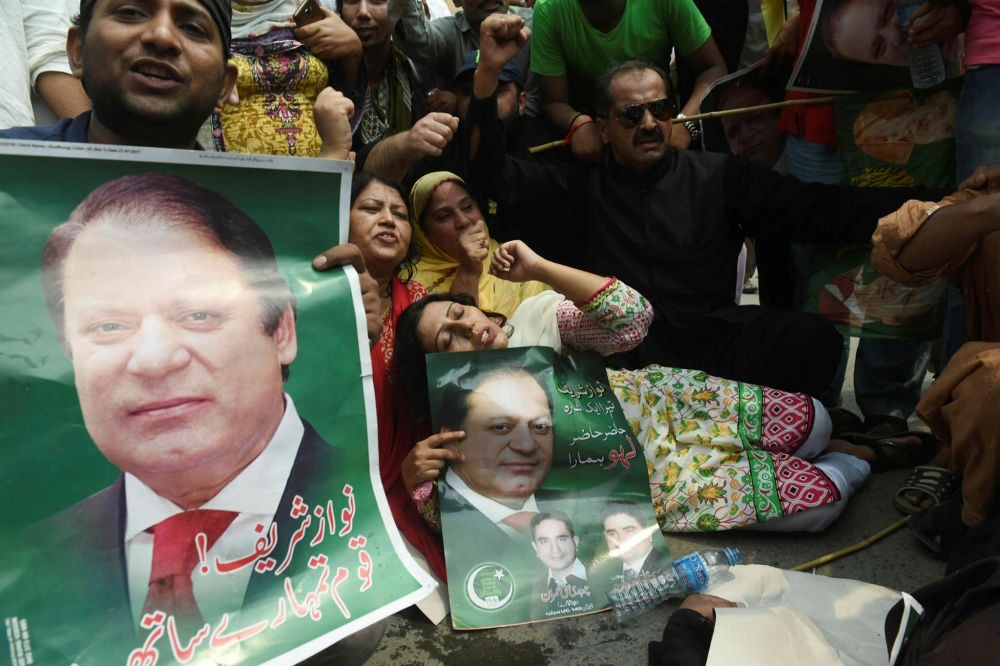 Amid Pakistan's fraying relations with the U.S. and India and loosening ties with the Gulf after the Qatari crisis, Prime Minister Nawaz Sharif was ousted after a petition filed by FETÖ-sympathizer opposition leader Imran Khan suggesting the reason may be more than corruption

Pakistani politics witnessed new turmoil after the Supreme Court disqualified Prime Minister Nawaz Sharif from his post or alleged corruption, according to Panama Papers. It was last year when the German newspaper Süddeutsche Zeitung shared the 11,5 million files from the database of Mossack Fonseca, one of the biggest offshore in the world, with the International Consortium of Investigative Journalists. According to the papers, 143 politicians including Russian President Vladimir Putin, Ukrainian President Petro Poroshenko, Iceland's Prime Minister Sigmundur Davíð Gunnlaugsson and many others were allegedly involved in money laundering and other financially criminal acts. The father of former British Prime Minister David Cameron was also accused for avoiding taxes through using the offshores in Panama.

Thereafter, another investigation was carried out and found the sufficient evidence for the removal in two months. Pointing out the hastily given decision, William Milam, a U.S. diplomat and a senior policy scholar at Woodrow Wilson International Scholars, wrote that Sharif was apparently grabbed by the 'deep state'. "So we shall see whether this is the final act of the Nawaz Sharif political melodrama, thrown out of office twice by the military, imprisoned by the military, and now threatened to be both thrown out of office and imprisoned again. If it happens, it will be pretty sure, though possibly never provable, that in a sense, the "deep state" got him, those (mostly mythical in my view) amorphous, anonymous, supposedly entrenched institutions and personnel that operate under the surface in great secrecy to control government policy making," he wrote.

The current situation of Pakistan gives some clues about the ouster. Apparently, the U.S. and India were not happy with Sharif's presence. Moreover, despite his close relations with Saudi Arabia, the recent Qatari crisis caused some dispute since he has refused to join Saudi and the United Arab Emirates in cutting relations with the tiny Gulf country. "Whoever replaces Sharif will have to tackle Pakistan's worsening ties with the United States, frayed relations with India, and persistent attacks by Islamist militants, including the Pakistani Taliban and Daesh," Reuters reported on Friday. Besides, China has started becoming an important factor affecting Pakistani politics since the country benefits from large Chinese investments.

Several Turkish media outlets have also pointed out Sharif's close relations with Turkey and his support against the Fetullah Terror Cult (FETÖ). The Pakistani government attempted to close the FETÖ schools and stop the cult's financial activities in the country. Yet, another group, which poses similarities with FETÖ and led by Tahir-ul Qadri, is known for its hostility toward Sharif. Upon his ouster, Qadri and his followers declared that they considered the decision a victory. It has long been claimed that Qadri and his followers, similar to FETÖ, have been infiltrating state institutions.

The fact that Khan has filled the petition first and has been critical of Sharif's policies on FETÖ, strengthens the claims that the removal may not just be a matter of corruption. After the decision of closing FETÖ schools, taken by Sharif, Imran Khan, speaking to a FETÖ media outlet, said it could be disastrous to the country. On his twitter account, he said, last year, "why should Pak school children have to pay for Turkish coup attempt & how could Turkey possibly be affected by Pak school kids?" After the coup attempt, Federal Minister for Planning and Development in the Sharif's cabinet, Ahsan Iqbal told Pakistan-based, English-language media outlet, DawnNews that "Khan was following Fethullah Gülen's model to destabilize the government," the paper said.

Another claim appeared in Oman's Times of Oman in 2015. Drawing a comparison between FETÖ and Khan's party, the report said "The Pakistan Tehreek-i-Insaf is also anchored in the same ideals and that is why Gülen's followers in particular tend to draw parallels between Khan and Gülen; both are using resources inside and outside the country i.e., the media, financial institutions, business organizations and a receptive youth to set the socio-political agenda in present-day Turkey."

Khan also has close relations with al-Qadri as the latter one has attended his election rallies where he asked Sharif to step down repeatedly. Although Khan said over the weekend that he wants to take over the post after the elections, it is unlikely that the cricket star-turned politician could gain the majority of the votes in the upcoming elections in 2018.