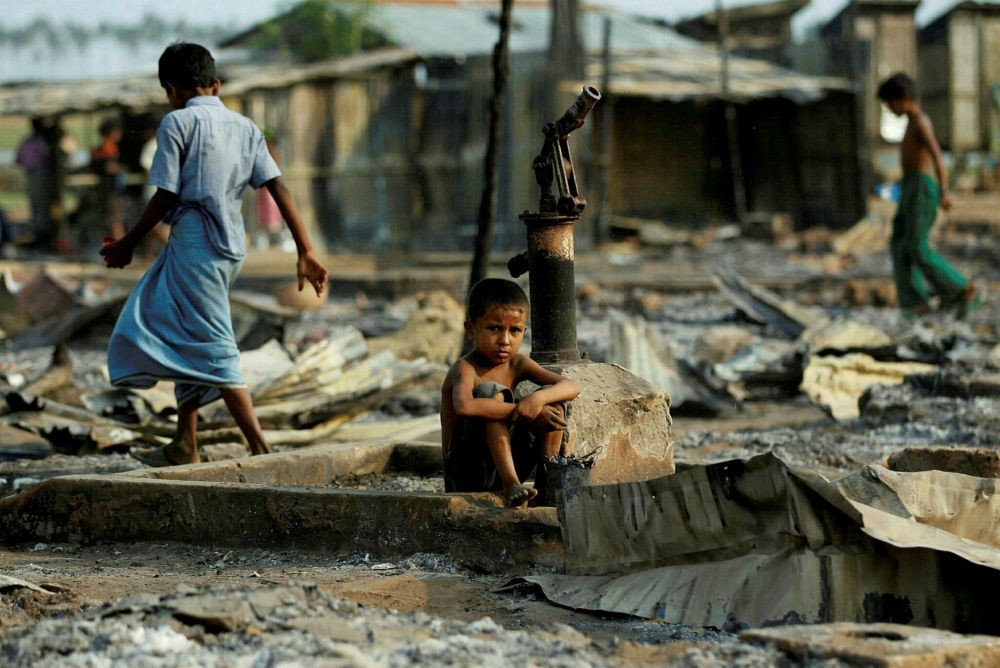 A boy sits in a burnt area after fire destroyed shelters at a camp for internally displaces Rohingya Muslims in the western Rakhine state, Myanmar.
by Compiled from Wire Services
Aug 05, 2017 12:00 am

Religious tensions have been on the rise in Myanmar as the Rohingya Muslims are buffeted by outbreaks of mob violence and places of worship have been shuttered.

In the early hours of Thursday, a group of about 30 people armed with sticks and swords entered the Muslim-majority Sakya Nwe Sin neighborhood in the former royal capital, Mandalay, according to a resident. A local administrator said two young Muslim men were injured, but authorities insisted the incident was not sectarian.

"That was just a fight between youngsters," said Police Major Maung Htay. "But they were swearing in the quarter so it sounded like insulting the quarter's residents."

However, Mandalay residents told Reuters the incident had stirred fears of a repeat of deadly communal violence that hit the same neighborhood in 2014.

Mandalay and other central towns have seen sporadic outbreaks of communal violence since Myanmar's transition from full military rule began in 2011. Nearly 200 people died and tens of thousands of people - mostly Rohingya Muslims - were displaced in 2012 in Rakhine state. Violence escalated there last year after attacks on border posts by Rohingya militants.

In a letter to Suu Kyi on Thursday, 20 groups working on human rights in Myanmar said the government needed to do more to protect Muslims, who make up 4.3 percent of the population.

"The Burma government must not appease the ultra-nationalists who are utilizing hate speech, intimidation, and violence to promote fear in Muslim communities across the country," said the letter.

"It is extremely alarming to see how anti-Muslim sentiment has spread beyond Rakhine state, where the Rohingya Muslim minority has been harshly persecuted and isolated, even to major cities like Yangon."

In several recent cases, local officials have bowed to nationalist pressure to shut down Muslim buildings that they say are operating without official approval. Two madrassas were shuttered in May in Myanmar's largest city, Yangon. Local media reported the closure of a mosque and another Islamic school in Oatkan, on Yangon's outskirts, this week.

Myanmar has long faced international condemnation for its persecution of the country's Rohingya Muslim minority in Rakhine state. Fresh violence erupted in Rakhine last October after nine border police were killed. The military operation sent an estimated 75,000 people across the nearby border to Bangladesh, where many gave accounts of abuses. A United Nations report issued earlier this year said Myanmar's security forces had committed mass killings and gang rapes against Rohingya during their campaign against the insurgents, which may amount to crimes against humanity.

The European Union proposed the investigation after the U.N. High Commissioner for Human Rights said the army's operation in the northern part of Rakhine State - where most people are Rohingyas - likely included crimes against humanity. Reuters was among international media escorted to the area last week in a tour closely overseen by security forces. Rohingya women told reporters of husbands and sons arbitrarily detained, and of killings and arson by security forces that broadly match the accounts from refugees in Bangladesh. Myanmar has largely denied the accusations, and says most are fabricated.